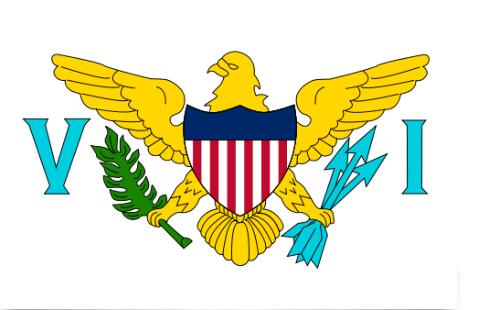 The western part of the Virgin Islands archipelago, just east of Puerto Rico. The area consists of 3 main islands: Thomas, St. John and St. Croix, as well as about 100 uninhabited small islands. The islands are of volcanic origin and are mountainous. The climate is tropical, but the irregular rainfall makes farming difficult. At St. Thomas and St. Croix produces fruits and vegetables to a lesser extent. In turn, tourism is an important activity. There is a large oil refinery on St. Croix, producing for the North American market.

The people: The majority of the population is of African origin. They speak English. However, there is also a small Puerto Rican minority who speaks Spanish. About 35-40% of the residents are from other Caribbean islands. 10% are North Americans.

Political parties: Divisions of the two major North American parties: Democrats and Republicans. Furthermore, there is a movement of Independent Citizens (ICM).

Government: US President Barack Obama is Head of State. John de Jongh has been governor since January 2007. There is a single-chamber parliament that has 15 members, of which 7 are elected at St. John’s. Thomas, 7 at St. Croix and 1 at St. John.