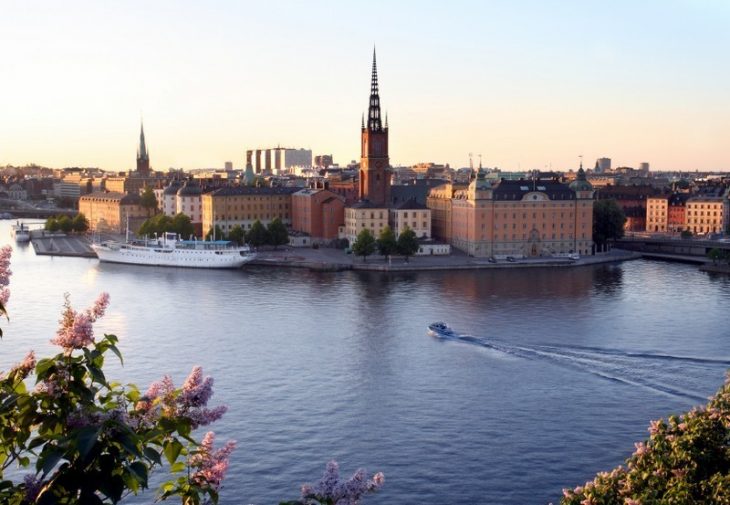 Stockholm is Sweden’s capital and largest city, on the border between the provinces of Uppland and Södermanland, at the mouth of Lake Mälaren in Saltsjön (the Baltic Sea). The municipality of Stockholm has an area of ​​188 km2 and 974 145 residents (2019).

Stockholm city comprises a total of 19 islands and islets, including Stadsholmen, that is, the ” Old Town ” or “The City between the Bridges” and the mainland area on the north and south sides of the Mälar outlet (“Malmarna”), Djurgården and Gärdet. A further three islands are located in Drevviken, but this is only partially within the boundaries of Stockholm municipality. The coastline that goes under the term “Stockholm archipelago” consists of about 30,000 islands, islets and islets.

The name Stockholm was used for the islets in Strömmen between Mälaren and Saltsjön, perhaps because it used to accumulate logs there, or because the oldest settlement was surrounded by logs (palisades).

Throughout the 1900s and up to 1960, settlement density in the city center increased. After 1960, this trend changed, and people moved more strongly to the suburbs, which experienced strong growth during the 1960s and 1970s. Later this has shifted further outwards, so that today the outer suburbs are growing the most, while the settlements in the inner suburbs are falling in favor of business purposes.

In the period after World War II, service industries and public administration have taken over as the most important source of employment in Stockholm. The city is, in addition to the national capital, an administrative center in Stockholm County and from 1942 bishop’s seat in the Stockholm diocese.

Stockholm is one of Sweden’s largest port cities. There are daily ferry connections to Helsinki, Mariehamn and Turku in Finland and Tallinn in Estonia, and several times a week to St. Petersburg, Riga and Klaipeda. The ice conditions in winter previously created great difficulties, but the harbor is now kept open all year round with the help of large icebreakers.

A number of railways leave the city, the four most important ones to Malmö, Gothenburg, Kiruna and Västerås from the Central Station. Domestic air traffic joins the international traffic over Arlanda Airport, which was started in 1960. It is located at Märsta, 40 km north of Stockholm city center. Arlanda Airport is complemented by Bromma Airport, which was commissioned in 1936.

The inner city and suburbs are linked to a well-developed network of bus lines and subways; the latter include a northern and a southern system, put into operation in 1950 and 1952, respectively, and linked together in 1957. In the 1970s, several of the subway lines were extended to new residential areas more than 20 km from the city center.

Due to islets, water and bridges, the city is referred to as “the Venice of the North”. Within the city limits, there are more than 20 larger and smaller bridges, some of which have predecessors from the Middle Ages, others built in the 20th century to direct traffic outside the city center.

The street system at Stadsholmen (“Old Town”) dates from the Middle Ages. The streets are in curves along the sloping terrain, with narrow alleys to the sea. Residential and warehouse buildings from the 1700s to the 18th century are half-timbered or simply brick interchangeable with stately citizen and noble palaces. In recent years, efforts have been made to preserve the neighborhood’s environment; today, Gamla Stan has a mix of business and residential areas where car traffic is closed out.

Old Town and the other “Stockholmers” have a number of monumental buildings, such as the Storkyrkan (Stockholm Cathedral), Riddarholmskyrkan and the German church (St Gertruds kyrka), all erected in the Middle Ages. To the south of the Great Church is the Börsen, a 1773 Rococo palace that also houses the Swedish Academy, with a facade facing the city’s old square, Stortorget, which in 1520 was the site of the Stockholm massacre. The castle, erected in 1690–1754 by drawings by Nicodemus Tessin de and dy, is located on the northeast side of Stadsholm, partly on the walls of the medieval castle “Tre Kronor”, which burned in 1697 (see Stockholm Castle). Facing the castle, on Helgeandsholmen in Norrström, lies the Parliament Building (1894-1906). The results of archaeological excavations at Helgeandsholmen in the 1970s and 1980s, which have shed new light on the city’s oldest history, are displayed in the Medieval Museum, which is buried in the ground in front of Parliament House.

The farthest west of Stadsholmen lies the city’s former administrative center of gravity, with the former Chancellor’s Office (government offices, now offices of the members of Parliament), the Bondeska palace (which served as a town hall in 1730-1915) and the Riddarhuset, the Swedish nobility’s representation building, built in 1641–1674.. On the south side of Stadsholmen, the southern Mälar outlet is closed by Slussen, a “traffic machine” with multi-level road and rail bridges, besides a small sluice that can drop small sightseeing boats and pleasure boats out and in of Mälaren.

Riddarholmen west of Stadsholmen has some of Stockholm’s oldest preserved buildings, including the Riddarholm church and several round towers that are remnants of the city’s fortification system from the late Middle Ages.

Stockholm saw strong growth in the late 1800s. Already in the late Middle Ages the settlement began to spread to the “malmarna”, ie the areas north and south of the islets. These neighborhoods got their first zoning plans in the 1600s, but developments really accelerated after 1866. The areas were regulated by long straight streets with rents in plastered bricks; finest at Norrmalm and Östermalm, easier for the working class at Södermalm. After World War II, large parts were redone; an extensive – and disputed – urban renewal has given many new office and business buildings, road tunnels and new places, especially in the area between Tegelbacken and Sergels Torg / Hötorget, which is Stockholm’s modern city.

Southeast of Norrmalm are three “islets”, Blasieholmen (landfast), Skeppsholmen and Kastellholmen (bridge connection). At Blasieholmen you will find the National Museum and the Grand Hotel. In 1634–1958, Skeppsholmen and Kastellholmen were the seat of Stockholm’s war station; several of the buildings have now been taken over by museums (Moderna Museet, which got a new building in 1997, Östasiatiska museet). At Kastellholmen lay the war yard; here the regal ship Vasa was built in 1628, and sank on the maiden voyage just outside the islet.

Vasastaden, north and west of Norrmalm, was developed according to the city plan of 1866, and is mainly a residential area with a number of public institutions (including Sabbatsberg Hospital) and office buildings.

Kungsholmen is the largest of Stockholm’s islands, separated from Vasastaden and Norrmalm by the narrow Barnhusviken bay.

Djurgarden, southeast of Östermalm, was originally royal hunting territory and zoo, but is now best known for a number of museums: Nordiska Museet (cultural) with open-air museum Skansen, Vasavarvet with warship Vasa from 1628, Liljevalchs konsthall, “painter prince” Eugens villa Waldemarsudde with more, in addition to the amusement park Gröna Lund.

Around the turn of the last century, large villas grew outside the city (Lidingö and Djursholm in the northeast, Nacka and Saltsjöbaden in the southeast), with suburban links to the city center.

Around 1930, functionalism came into Nordic urban planning, accelerated by the “Stockholm Exhibition” in 1930, with new principles for housing construction: away from the quarterly system, into slats with better solar and lighting conditions.

New “sleeping villages” were built around Stockholm just after World War II. Vällingby was the first, with a shopping center above a metro station. Satellite cities like this require an expanded communications network. Since the 1950s, an extensive road network has been developed, with the construction of highways through central districts and traffic machines on the outskirts of the city.

The areas around Lake Mälaren attracted considerable trade early on. On an island in Lake Mälaren was Sweden’s oldest village, Birka (Björkö), in the 700-900s. Stockholm is first mentioned in writing in 1252; as early as the 1270s, the sources show that Stockholm has evolved from a fortification at Mälaren’s outlet to a city. Stockholm gradually became an important shipping port for iron.

The connection with Lübeck was very important throughout the Middle Ages, and a large part of the citizens were German. They made up half of the City Council members until 1471, when Sten Sture defeated Christian 1 at Brunkeberg (Norrmalm). In 1520, Stockholm was surrendered to Christian 2, which in November arranged the Stockholm massacre. In 1523 Gustav Vasa took the city ​​after two years of siege.

In the 1600s, the fortifications were demolished, and Stockholm’s first cousin Claes Fleming made the first town plan. The population, which was only a maximum of 9,000 in 1630, grew strongly and reached 72,000 in 1757. During Gustav 3, Stockholm also became the cultural center of the kingdom, and many magnificent buildings, statues and so on were erected.

In the second half of the 19th century, the development of a metropolis began. This has left traces in interesting examples of urban planning and architecture, not least in new suburban areas, a development that also soon spread to the neighboring municipalities (Solna, Lidingö, Nacka, Djursholm and others). The city has experienced an increasing migration over the last hundred years.