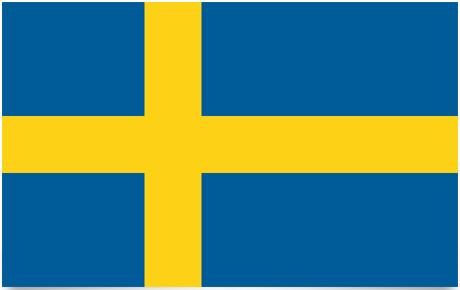 The Swedish flag is believed to have been invented in connection with the legend when Erik the Holy landed in Finland in connection with the first Swedish crusade in 1157. In the blue sky, Erik saw a yellow cross and he saw this as a sign from God. However, there is not much evidence for this legend… These colors, yellow and blue, have always been common in Sweden and about 400 years later in the 16th century, there is more evidence that the flag began to look like it does today.

The Swedish flag has thus received its appearance from, among other things, the blue and yellow colors that were in the Tre Kronor coat of arms and the medieval crusade banner that was used in the crusades. The flag is believed to have been used as a resistance flag to the Danish Union and is inspired by Dannebrogen ( Danish flag ).

Sweden’s flag is actually the world’s second oldest flag after the Danish flag!

Government: Constitutional succession monarchy. Karl XVI Gustav has been king of the country since September 15, 1973. Social Democrat Stefan Löfven has been prime minister since October 2014. Parliament (Parliament) has one chamber with 349 members elected for a four-year term.