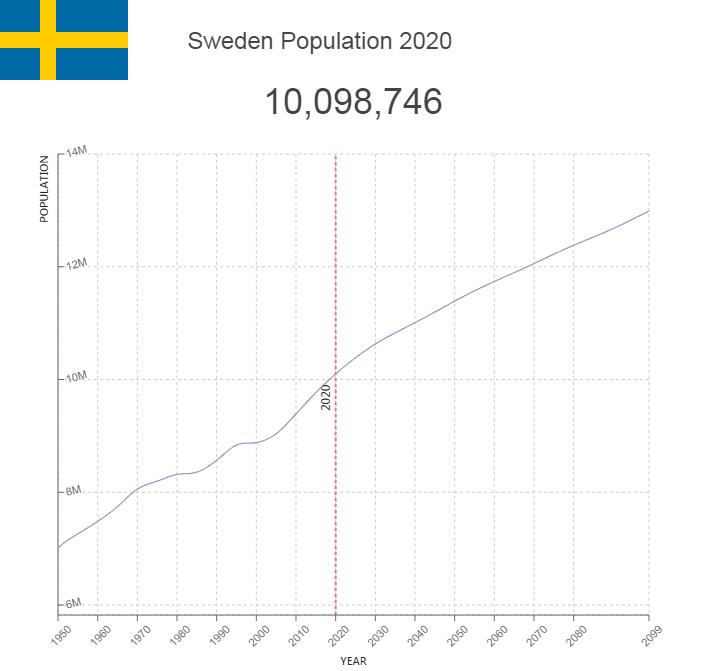 Sweden is the largest and most populous country in the Nordic countries. The country has large resources in the form of timber, minerals and hydropower. This has made it possible to develop industry, which in turn has given Sweden a high standard of living and a good welfare system.

In January 2017, Sweden’s population exceeded 10 million. In recent years, growth has been relatively high, 10 percent in the period 2000 to 2015, compared to 2 percent for Europe as a whole. In the same period, Norway saw 16 percent growth in population. The settlement shows a high degree of regional concentration to southern and central regions. Norrland, with 60 percent of the area, has only 12 percent of the population. 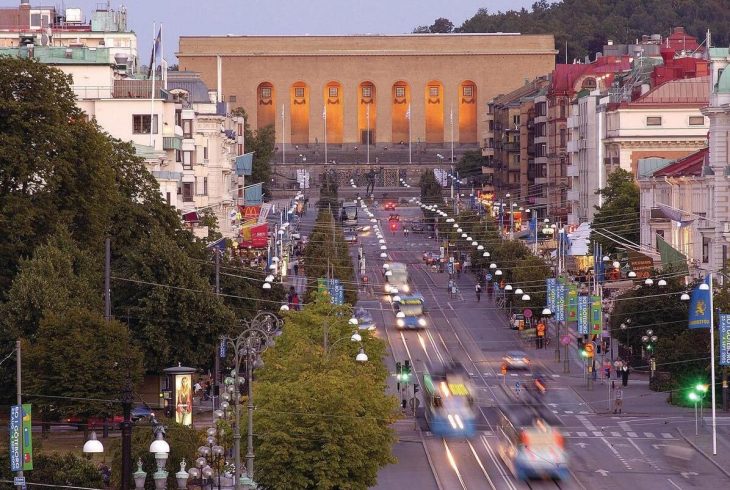 Population of Sweden by Year (Historical)

Major Cities in Sweden by Population

Sweden experienced quite a large increase in population in the 19th century, and the agricultural communities of the time were “overpopulated”. Immigration to North America began around 1850. It reached 40,000 emigrants per year in the 1880s, but declined sharply after 1920 with the development of industrial communities and better employment opportunities at home. Since the 1930s, birth rates and mortality in Sweden have been declining.

Over the past fifty years, fertility has shown greater variation than usual in Europe, with low numbers in the 1970s and 1980s, a peak in the 1990s, and then decline. However, overall fertility figures have long been below the level of reproduction. In 2017, the total fertility rate was 1.78.

Table 1. The population is at most unevenly distributed between the south and the north. Norrland has a tenth of the population and over half the area.

The country has experienced sustained urbanization throughout the 20th century, and in 2016, 87 percent of the population lived in cities and towns. More than 35 percent live around and within the major metropolitan areas Stockholm, Gothenburg and Malmö – Helsingborg. Greater Stockholm has 2.2 million residents (2016), Greater Gothenburg with suburbs around 990,000 residents and Greater Malmö 700,000 residents.

The Sami indigenous population constitutes a small minority group in Sweden of about 17,000 people, of which 2500 are reindeer herding. The Sami live mainly in northern Norrbotten’s Län (Lapland), but many also live further south. The southernmost Sami town in Sweden is Idre in Dalarna.

Foreign-born people make up an increasing proportion of the Swedish population. In the 1960s and 1970s there was a high labor migration. Since the 1980s, non-Nordic immigration has been largely characterized by family reunification and refugees.

Since the Second World War, the religious image has undergone major changes in Sweden. Freedom for all religious communities and the right to be excluded was enacted in 1951. Later immigration created a pluralistic society, which was one of the main motives behind the abolition of the state church on January 1, 2000.

In the period 1995-2005, the proportion of the population who are members of the Svenska kyrkan has dropped from 86 percent to 77 percent. The Swedish Church consists of 13 dioceses (dioceses): Uppsala with archbishop, Lund, Växjö, Gothenburg, Skara, Karlstad, Gotland, Linköping, Strängnäs, Stockholm, Västerås, Härnösand and Luleå. About 3200 priests serve in 2200 churches in Sweden. The Archbishop is primus inter pares – the first among equals. Since 1960 (Parliamentary resolution in 1958), the church also has female priests.

After the revocation of the state church, new bishops are appointed by election in the diocese in question. Although the Church of Sweden is governed by its own law, it is still evangelical-Lutheran, nationwide, democratic and episcopal. Instead of church tax, church activities are funded by a membership fee. Current members continue automatically, while new members must be registered. The Church of Sweden has retained all of its properties and remains responsible for funerals.

The Christianization of Sweden began in the 830s (see Ansgar) and ended after 1100. The oldest diocese is Skara, founded around 1014. The country became a separate church province in 1164, when the Archdiocese of Uppsala was established. From the end of the 13th century, the glory of the Swedish medieval church began with many monastic foundations, numerous church buildings, rich literature and great political power for the bishops.

The Reformation era was dramatic, with significant church members such as the brothers Olaus and Laurentius Petri on the evangelical and Archbishop Olaus Magnus and the Jesuit monastery on the Catholic side. Johan 3 represented a middle position. On the parliament in Västerås in 1527 Gustav Vasa broke with Rome. The history of the Reformation ended with the Uppsala meeting in 1597, where the Stones professed to Lutheran domination.

After the Reformation, the Swedish church became more and more of a state church. A special feature for Sweden is that the priesthood had representatives in the Riksdag and there was a stand of their own until 1868. The church constitution was established in the “church collage” of 1686. Folk revivals in the 19th century usually had a free-church feel and led to the evangelical free churches becoming stronger here than in neighboring countries.

A national church revival, the Young Church Movement, broke out in Sweden in the early 1900s. It had a vision of the people of Sweden as a Christian people, but departed from the Free Church’s notion of pure congregations of professing believers. The movement’s leaders were Johan A. Eklund, Nathan Söderblom, Einar M. Billing and Manfred Björkquist.

From the 1960s, Swedish theology has been characterized by efforts to meet the criticism that has been directed at Christianity from philosophical and natural sciences. Unlike other Nordic countries, in Swedish theology and church life there has been a clear element of high church, with, among other things, a certain emphasis on apostolic succession.

The official language and mother tongue of the majority of the population is Swedish. Since 2002, Sami, Finnish, Tornedal Finnish (meänkieli), Romani and Yiddish have been given official status as a minority language. Swedish sign language also has official status.

In Norrbotten, northern Sweden, there is a Sami-speaking minority numbering about 9,000 people, and a native Finnish-speaking minority of about 50,000. Finnish is by far the largest minority language. Through refugees and asylum seekers, the country has gained linguistic minorities of Slavic speakers from the Balkans, Spanish speakers from Latin America, Arabic and Persian speakers.