Where is Sweden located on the map? Sweden is an independent nation located in Northern Europe. Check out the following images to see location of Sweden on maps. 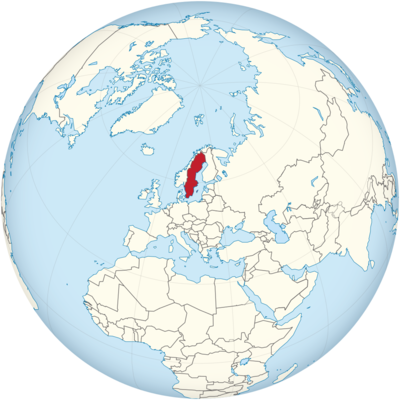 Sweden is in the north of Europe. It has land borders with Norway in the west and Finland in the north. In the east lies the Baltic Sea. In the southwest, the Kattegat marine area borders Sweden. Sweden is only separated from Denmark in the far south-west by the Öresund. A bridge, the Oresund Bridge, connects the two countries.

Sweden measures 1572 kilometers at its longest extension. It takes a while to drive through the country from south to north! It is at most 499 kilometers wide. Sweden has more than 220,000 islands. The largest are Gotland and Öland in the Baltic Sea.

Sweden is in Northern Europe.

Sweden can be divided into three areas: southern, central and northern Sweden. They also say Götland, Svealand and Norrland – you can find a map in the slideshow below. In addition, a total of six landscapes can be distinguished.

Sweden is a flat country in the south. The southernmost area is called Schonen, in Swedish Skåne. Schonen is a plain (1). It is followed by a plateau, the southern Swedish highlands (2). It is around 350 meters high. The area here is called Småland. The highest mountain here is the Tomtabacken with 377 meters.

A little further north is the Central Swedish Depression (3). Here it is flatter again and here are the largest lakes in the country, the Vänern and the Vättern.

In the west, the Scandinavian Mountains (4) form the border with Norway. It is between 1000 and 2000 meters high. The highest mountain in Sweden is located in the north of these mountains, it is the Kebnekaise with a height of 2097 meters.

The foreland (5) is the area east of the mountains. The mountains drop off and become a hilly landscape. Many rivers that have their source in the Scandinavian Mountains flow side by side through the foreland into the Baltic Sea.

Finally, the flat coastal landscape stretches along the Baltic Sea (6).

Archipelago are small rocky islands that are typical of Scandinavia. They occur on the coast, but also in large lakes such as Vänern. They often form groups from many such islands. Such archipelago landscapes are also called archipelago. There are archipelago gardens off Stockholm and Gothenburg, for example.

Although Sweden is far to the north, it has generally mild temperatures. Other countries at this latitude have much cooler climates. This is due to the Gulf Stream, which brings warm air across the Atlantic.

Due to Sweden’s size, the climate is not the same everywhere. In the south there is a maritime climate. In the center there is a humid continental climate. It’s getting colder and colder in the north. In the far north Sweden is in the Arctic Circle, here it is arctic. Here in winter the sun doesn’t rise at all on some days, and in summer it doesn’t set. Even in Stockholm, the days last 18 hours in summer, whereas in December it is only six hours of light.