Taipei is the capital of Taiwan. The town is located north of the island, on a plain about seven meters above sea level. The capital city itself has 2 646 204 million residents (2019), while the metropolitan area has a population of about 6.7 million.

The town is in the Taipei basin on the east bank of the Tanshui River, 20 kilometers from the river’s outlet. The capital is surrounded by hills on all sides. There is therefore a great deal of pressure on land and the environment.

Taipei is Taiwan’s political and economic center and one of the island’s most important cultural centers.

Taipei is Taiwan’s most important industrial and commercial city with the production of high-tech information products and other electrical and electronic appliances, machinery, textiles and food products. Taipei is a center for the country’s financial sector. Tourism is also of great importance to the city’s economy.

Five kilometers north of Taipei, there is a national airport (Songshan). Taoyuan International Airport is 32 kilometers west of Taipei. Railway and highway link Taipei to the other major cities along the west side of Taiwan.

The National Palace Museum houses around 700,000 Chinese art and cultural objects, formerly belonging to China’s imperial families. In the city there are several other museums, including a human rights museum.

There are built memorials for Chiang Kai-shek and Sun Yat-sen.

Modern Taipei is developed around a triangular core of three different centers that were formed at different times in history. Around 1720 there was a market place on the Tanshui River, which was later named Mengchia. Throughout the latter half of the 19th century, the Tataochen was built up along the Tanshui River further northeast as a competing trade center. Somewhat later, an ‘inner city’ developed east of Mengchia. While Tataochen became the center of tea processing, it became the ‘inner city’ center of the modern trade and finance industry.

Public offices were established in the city when Taiwan was declared a separate province within China in 1885. In 1891, the city was declared the official provincial capital. The Japanese developed under their rule (1895–1945) Taipei as a modern city. President Chiang Kai-shek established Taipei as the new “temporary” capital of the Republic of China on December 9, 1949 after his Nationalist Party was expelled from the mainland. As a result of mass immigration of refugees from the mainland, the population grew rapidly (1920: 164 000; 1955: 704 000). During Taiwan’s subsequent strong economic growth, Taipei has continued to grow, and the city has received many immigrants from the countryside.

Taipei has since 2004 got its landmark with the Taipei 101 office block. The building is 508 meters high, including a 60 meter high spire. 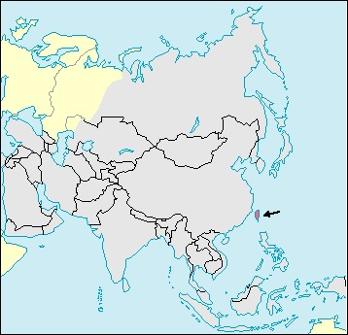