Taiwan, Republic of China, State of East Asia (regarding Taiwan’s international law status see State of the State and Politics); 36,000 km2, 23.6 million residents (2019).The state includes the island of Taiwan (Formosa), about 150 km east of Fujian province on the Chinese mainland, and the small archipelago of Pescadores in the Formosa Strait between the island of Taiwan and the People’s Republic of China to the west. Taiwan also includes the fortified islands of Jinmen (Quemoy) and Mazu with associated small islands near mainland China. The capital is Taibei (2.7 million residents, 2015).

Taiwan encompasses the island of Taiwan and the small archipelago of Pescadores in the Formosa Strait. The island of Taiwan has, due to major faults, gained a north-south extent and a general slope to the west. The east coast is steep and straight. Inside it, the high Zhongyang Mountains rise. To the west towards the Taiwan Strait is a fertile coastal plain. Taiwan has a subtropical climate in the north, tropical in the south.

The country, although in practice it has been independent since 1949, is not a state but a part of China. This is the official position both in the People’s Republic of China, which controls the Chinese mainland, and in Taiwan. Both the President and Parliament are elected in general elections every four years.

During the late 1990s, the country was one of the world’s fastest growing economies and became one of Asia’s “tigers” (along with Hong Kong, Singapore and South Korea). With the exception of a few years in the late 00s, the country has had a stable economy. Growth in the business sector is mainly in the transport and electronics and chemical industries. Among the most important export products are computers, textiles, sporting goods and toys. 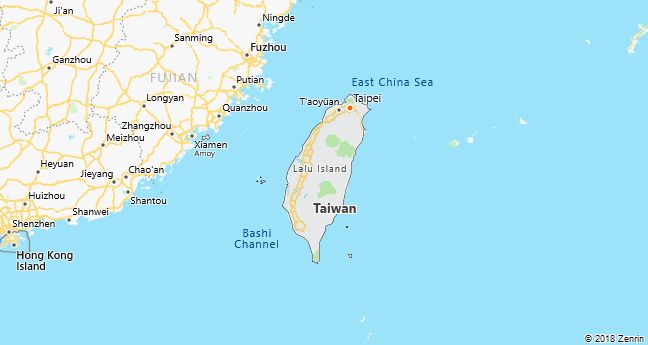