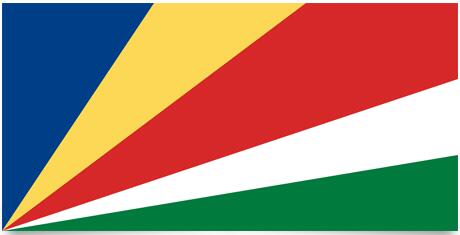 Blue stands for the sky and the sea that surrounds the Seychelles and yellow is the sun that gives both light and life. Red is a symbol of the people in their work in unity and love for the future. White stands for harmony and social justice and green stands for land and vegetation.

The flag was adopted on June 18, 1996. The one used before the current one was introduced in 1977 after a coup by the governing party SPUP. The colors of the flag were chosen from the colors that represented the party; red and green with a white wave. It replaced the flag with the colors blue, red and white which was adopted only the year before independence from Britain.

The country is an archipelago of 92 islands, the largest of which are: Mahé, Praslin and Digue. These have granite subsoils, while the others are predominantly coral islands. The landscape is undulating, the climate tropical with significant rainfall and vegetation. Although only the largest islands are populated, the population also exploits the other islands economically.

The People: The inhabitants of Seychelles are predominantly a mixture of Africans and Europeans. There are small minorities of Europeans, Chinese and Indians.

Languages: English and French (official). The majority of the population speak Creole, a local dialect with European and African roots.

Government: Danny Faure has been President since October 2016. The House has one chamber of 33 members.