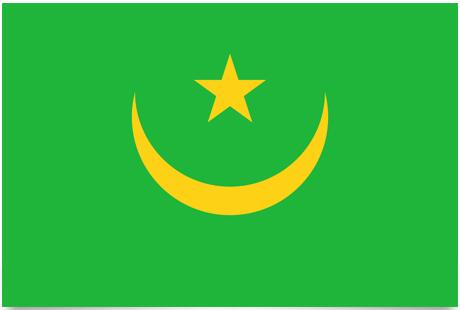 The flag was adopted the same year that Mauritania became an autonomous republic, in 1959, but the country still maintained special relations with the French Commonwealth. The green color is known to stand for the Muslim religion which is the most widespread religion in the country. The crescent moon with the star is also a traditional Muslim symbol, and originates from the Ottoman Empire.

The green and yellow color is also included in the pan-African colors and the flag indicates the country’s geographical location in Africa. Green is also a classic color to symbolize hope and yellow can also be seen as the sand in Sarah’s desert.

Two-thirds of the country – in the north – is part of the Sahara desert. Therefore, it is characterized by an extremely dry climate and a varied landscape with rocky plains and large areas of sand dunes. To the south, the desert passes into the savannah of the Sahel belt, which is characterized by some rainfall and vegetation. The southwest of the country, whose water flows into the Senegal River, gets some more rainfall. It is in this area most of the population and the economic activities are concentrated – except for the nomads scattered throughout the territory. The most serious environmental problems in the country are the continued desertification, erosion and lack of water.

Military dictatorship, closely allied by the EU and the US. The EU carries out predatory fishing in the rich fishing waters off the coast of the country.

The people: 70% of Mauritanian people are “Moors” – they are descended from the people who created the Almoravid Empire in the Middle Ages. The Moors were the original name for the nomadic people who lived in northwestern Africa – a mix between Arabs, Berbers and other peoples. The other 30% of the population comes from slightly southern parts of Africa. This applies to polar (which the French called “toucouleur”), soninké, uolof and bambara.

Languages: Arabic and French (official). The ants speak hassanya, which is an Arabic dialect. In the south, fulani (pulaar’s language) and sarakole (soninké’s language) are spoken.

Social organizations: The Union of Mauritanian Workers with 10,000 members.

Administrative division: 12 regions and the district of Nouakchott

Government: Military dictatorship. General Mohamed Ould Abdel Aziz has been President since August 2008. Yahya Ould Hademine has been Prime Minister since August 2014.
Parliament has two chambers: the National Assembly with 81 members and the Senate with 56. 5 and 6 year periods.