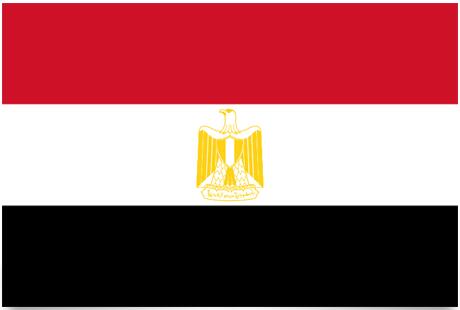 The country’s flag was adopted on October 4, 1984. In the center is the image of the coat of arms, the red color symbolizes the revolution before 1952 and the struggle the people waged against the oppression of the British occupation. The white color stands for the peaceful way of the revolution. The black color is a symbol of the end of the oppression of the British.

99% of Egypt’s population lives along the Nile River – Nahr-an-Nil – or in its delta facing the Mediterranean. This area covers 30% of the country’s total area. The rest of the country is covered by desert and some isolated oases. The flood of the Nile has dominated the country’s economic life for millennia. The river is controlled today by a number of dams, of which Aswan in the south is the largest. In addition to traditional crops such as wheat, rice and corn, there are also plantations with cotton and sugar cane. The utilization of the energy from the hydroelectric plants, like the extraction of oil on the Sinai Peninsula, has favored industrial development. The biggest environmental problems are the big cities’ uncontrolled growth beyond fertile soils, soil depletion and the use of fertilizers and pollution of the water.

Military dictatorship, closely allied with the EU and the US.

The People: The Egyptian population is ethnically strongly composed. The majority are of Semitic Hamitic descent. The second largest group is the Bedouin, who have a tribal organization, are practicing nomadic people and live in the desert of the eastern part of the country. The third largest group is the Nubians. An African people who has lived around the Upper Nile for millennia. There are also ethnic traces of the conquerors who have passed through the country for millennia: Romans, Greeks, Turks and most recently Englishmen and Frenchmen. A Berber minority lives especially around the oases. A Coptic minority does not differ racially from the rest, but differs by their Christian religion. In addition, smaller groups have immigrated from Armenia and other countries, and currently 2 million undocumented refugees from South Sudan.

Religion: Islam, predominantly Sunni Muslim. There are about 10% Copters and other Christian directions.

Social Organizations: Egypt’s Workers’ Union is the country’s only national organization. The Association of Egyptian Students.

Government: Field Marshal Abdel Fattah el-Sisi has been the country’s president since June 2014; since June 2013 military dictator in the country. Sherif Ismail has been prime minister since September 2015. Majlis al-Sha’ab (parliament) has 518 members, 10 of whom are appointed by the president. Majlis al-Shura (Advisory Council) has advisory functions alone and has 264 seats, 88 of which are appointed by the president.