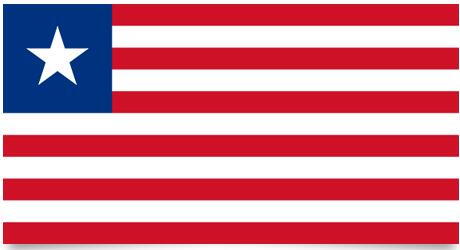 The eleven stripes in the flag represent the states that signed Liberia’s declaration of independence. The flag is very reminiscent of the American one and this is to remind that the United States contributed to the creation of the state of Liberia. The star in white is a symbol of freedom and will illuminate Africa, the dark continent.

The flag was adopted on July 26, 1847, in connection with their independence. The flag before that had a white cross where the star of the current flag is located. The first flag was used from 1827. The country originates from an American colony where freed American slaves lived, the colony was created in 1816.

It can be divided into 3 geographical regions: the coastal area where the majority of the population lives is flat and swampy; the central plateau which is intersected by many valleys and is covered by dense tropical rainforest; and finally the mountain range towards the border with Guinea. Rice, coffee, sugar cane, cocoa and palm oil are grown in the fertile coastal zone. Large North American companies also own larger plantations with rubber palms. The country is Africa’s largest iron producer. The biggest environmental problems are the forests and the illegal hunting. In addition, the civil war has caused serious damage to the environment.

The People: Most Liberians belong to the people man, kwa and vai, subdivided into 30 ethnic groups. Of these, the most significant are mandingo, kpel, mendo, kru, gola and bassa. The Vai people are distinguished by creating one of the continent’s only written languages. The “repatriated” released North American slaves make up less than 5% of the population.

Religion: The majority practice traditional African religions. About 15% are Muslims and slightly fewer Christians. Despite this, the state is officially Christian.

Language: English (official), although spoken by only 15% of the population. The rest speak African languages.