The main island of Mahé, like Silhouette, Praslin and La Digue, are all mountainous and have taken on special forms through the erosion. The outer islands are flat and rise only a few meters above sea level. The location of the archipelago just south of the equator provides a tropical climate with distinct oceanic character.

The president, who is both head of state and government, has great power. Presidential elections and elections to the Legislative National Assembly take place every five years. The country became independent in 1976.

Since the opening of the international airport at Mahé in 1971, the economy of Seychelles has been dominated by the tourism industry. The lack of agricultural land complicates the development of agriculture and explains the country’s great dependence on food imports. Rice, the most important basic food, is imported. Agricultural products exported are coconuts, cinnamon and vanilla. Fishing and export of both fresh and frozen and canned fish are also of economic importance. 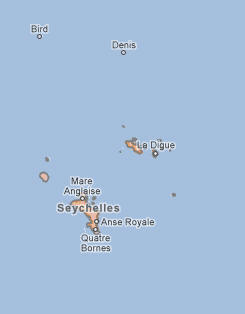