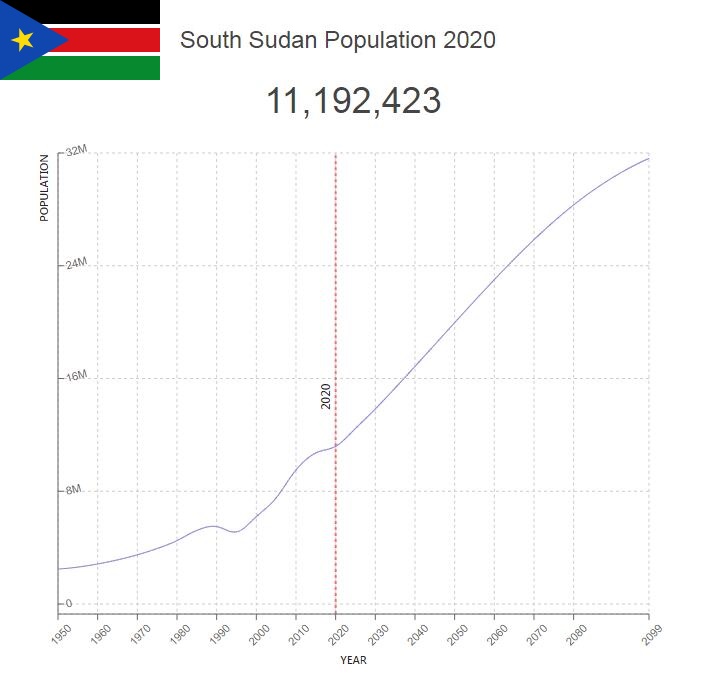 South Sudan declared independence from Sudan in 2011 and is the youngest state in the world. Since independence, conflicts between different ethnic groups have led the country into a bloody civil war.

It is quite low population density in South Sudan with around 19 people per year. square kilometers. Although there has been an increasing degree of urbanization in recent decades, only about 20 percent of the population lives in urban areas. The largest cities are the capital Juba, as well as Bor, Wau, Yei and Malakal.

The population of South Sudan is composed of around 60 different ethnic groups. The main weight of the population is nilots, and the largest ethnic groups are dinka, nuer and shilluk. The Dinkas and Nueras are mainly cattle herds, while the Shilluks are settled peasants.

Among the more populous ethnic groups are the Bantu- speaking Azande in the southwest, and their traditional lands also extend into the Central African Republic and the Democratic Republic of Congo. In the southeast, the murals and the Anuak people live, and both of these ethnic groups also include parts of southwestern Ethiopia.

South Sudan’s official language is English. This language was introduced by the British when they ruled the area in the form of the British-Egyptian condominium in the first half of the 20th century.

There are a number of languages ​​that belong to the Nilo-Sahara family, including the Dinka, Nuer and Shillu languages. Azande and other smaller ethnic groups speak different languages ​​belonging to the Niger-Congo family.

In connection with the many wars, a large part of the population has fled from South Sudan. In the last civil war alone, more than 5 million have fled. Around 2.2 million are still refugees in neighboring Ethiopia, Uganda, Sudan and Kenya.