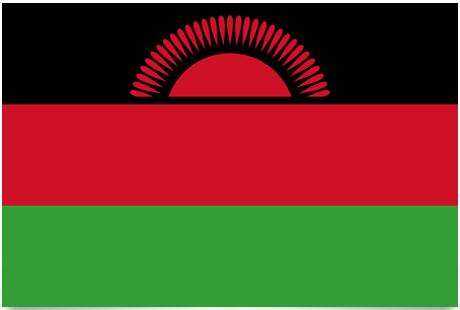 Malawi National Flag, The Flag was officially adopted in 1964. As in many countries in Africa and Asia, Malawi’s flag is based on a political movement’s flag, here the flag adopted by the Malawi Congress Party in 1953.

In 1964, the rising sun was added, symbolizing the dawn and hope of freedom for all of Africa. The black color stands for Africa, the red for the blood shed in the struggle for freedom, and the green for Malawi’s fields and forests.

In 2010, President Bingu wa Mutarika (1934-2012) modified the flag to replace the red and black stripes and the rising sun was replaced by a bright white sun in the middle of the flag. In 2012, Parliament again decided to adopt the original national flag.

The country’s level and climate are very varied. A decisive climatic factor is the Rift fault, which cuts through the country from south to north. Part of this deep fault today is made up of Lake Malawi – formerly called Nyassa – which occupies a fifth of the country’s territory. The rest of the country is made up of plateaus of different heights. The most temperate zone and at the same time the highest is located in the southern part of the country, and at the same time the majority of the population and economic activity – predominantly agriculture – is concentrated. The lower lying zones are dependent on the amount of rain covered by savannah, forest or rainforest. Soil depletion and erosion are among the country’s most serious environmental problems. In early 1998, the drought increased the problem of water access.

Religion: No official religion exists. Christians, 50% (of which 20% are Protestants and 18% Roman Catholic); Muslims (20%). A large part of the population practices traditional rituals, which does not, however, prevent them from declaring themselves as such. Christians or Muslims.

Languages: English and Chichewa (official languages). Other ethnic groups use other bantu languages.

Government: Republic with Presidential Reign. Peter Mutharika has been President since May 2014. One Chamber Legislative Assembly: National Assembly with 193 members.