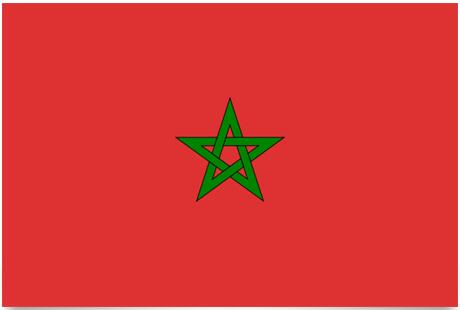 The red color is a symbol of the relationship between the royal family and the Prophet Muhammad; via the fourth caliph Ali’s wife Fatima who was the daughter of Muhammad. Red has also stood for Morocco’s power for a long time. The green pentagram is a five-pointed variant of Salomon’s seal. It is an occult power symbol that has been used in thousands of cultures for thousands of years. To Muslims, it represents the goddess Istar who was later assimilated into the Prophet’s daughter.

In the flag, the money chart is a symbol of the link between God and the nation. The pentagram is green, a color associated with Islam. The five headlands can also be interpreted as the five pillars of Islam. The flag was adopted on November 17, 1915.

The country is open along its 800 km long coast facing the Atlantic Ocean. In mountainous eastern Morocco, the Atlas and Rif mountain ranges extend from south to north. They are covered in sparse vegetation. Here lives the Berber people who are nomads. Citrus fruits, vegetables and various cereals are grown on the plain at the foot of the mountains. On the western slopes there is widespread cattle farming as well as mines rich in phosphate, zinc and lead. Grapes and citrus fruits are grown on the plain facing the coast. The fishing waters are rich, but are mainly used by foreign fishing fleets. The soil erosion is a consequence of various factors, including the expansion of agriculture into marginal soils, the overgrazing of pastures as a result of the surplus of animals, the destruction of the vegetation ifbm. the collection of firewood and the transformation of woodlands into cultivated land.

Dictatorship and monarchy with widespread oppression of human rights. Supported by the US and the EU.
Occupying power that has occupied Western Sahara. 83 of the countries of the world support Western Sahara’s right to self-determination, 42 support Morocco’s claim to Western Sahara, but do not support the sovereignty of Morocco today.

Government: Simple monarchy. Sayyidi Muhammad VI ibn al-Hasan, King since July 23, 1999. Saadeddine Othmani, Prime Minister since March 2017.
A constitutional reform passed in September 1996 paved the way for the first time for a two-chamber legislative assembly. The lower house – Majlis an-Nawwab – with 325 members is elected by direct election every 5 years and is responsible for enacting legislation. However, that is what shapes the laws.
The upper house – Majlis ash-Shura – with 270 members is elected by indirect election and has a consultative nature.