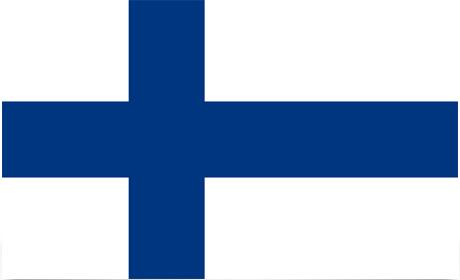 The Finnish flag was adopted in 1918 after the Finnish Civil War. The white base of the flag is said to represent Finland’s white snow and the blue cross stands for all watercourses in this “Land of a Thousand Lakes”. The national flag originates from the Finnish sailing association flags to which the Tsar of Russia gave his permission.

Flat land (average height is 150 m) with hills formed when the glaciers at the end of the ice age receded, as well as lakes that are not particularly deep. Most of the population lives on the coast, which is the country’s primary agricultural area. The economic basis is the utilization of the coniferous forests. The main export products are wood, pulp and paper. Emissions of sulfur dioxide and contaminated water in the Baltic Sea are the most serious environmental problems. Furthermore, the country is threatened by extensive radioactive pollution from Murmansk in northern Russia.

The people: 92.1% of the population is Finnish and 7.5% are Swedish. Furthermore, there are minorities of Gypsies and Sami.

Government: Sauli Niinistö, President since March 2012. Juha Sipilä Prime Minister since May 2015. Parliament has one chamber with 200 seats. Since 1996, the Sami have had their own parliament – sowmediggi – with limited autonomy and the right to cultural legislation.