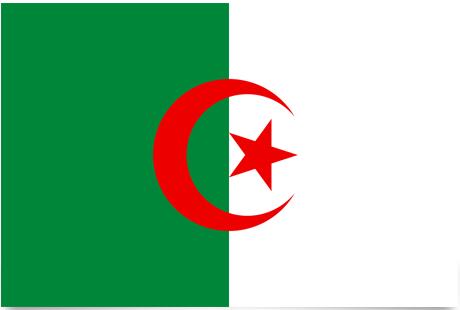 The flag of Algeria is divided into two parts in white and red and white, with a crescent moon and a star in the middle in red. The flag was adopted on July 2, 1962. The flag has the color red and white because it is the color of Islam and the crescent and the star in the middle stand for the Ottoman Empire. The white color represents purity and the red represents socialism. The Algerian navy uses a special war flag, it consists of the national flag and two crossed red anchors in the canton.

The origin of the flag is disputed. The freedom movement ENA used a similar flag in the 1920s when it was created by the politician and nationalist leader Messali Hadj. According to some sources, ENA’s flag is associated with flags used by the legendary freedom fighter Abd el-Kader in the early 19th century. In 1954, during the War of Independence, the modern Algerian flag was used by the liberation movement FLN. It was also used by the government in exile between 1958 and independence in 1962.

Algeria’s fertile lands facing the Mediterranean are bordered in the south by the Tellia and Sahara Atlas mountains with a high plain between the two. Further to the south lies the Sahara desert with a subsoil rich in oil, natural gas and significant deposits of iron. The variations in altitude and climate in the north allow for a large variation in crops – including Mediterranean crops such as grapes, citrus fruits, olives and the like. But both flora and fauna are exposed to major threats. More than 30 mammals, 8 reptiles and 70 bird species are at risk of extinction. The continuous growth of the desert especially affects the areas that are on the outskirts of the Sahara. But soil erosion is also a more general problem throughout the country. It already touches 45% of agricultural land – 12 million hectares.

The People: The Algiers are predominantly Arabs (80%) and Berbers (17%). In the south, nomadic groups are related to the Tuaregs from Nigeria and Malí. About 1 million Algiers live in France.

Languages: Arabic (official and spoken by the majority of the population). Berber in some zones. French is widely used, but is replaced by Arabic in education and public administration.

Political parties: After the secession from France, the National Liberation Front (FLN) was the only party. Its support has dropped dramatically since 1989. The reforms in 1989 opened up a multi-party system: the Socialist Avant-garde Party (PAGS), the Front of Socialist Forces (FFS), the Movement for Democracy in Algeria (MDA), the Collection for Culture and Democracy (RDC), and most recently the National Democratic Association led by Lamine Zeroual. The Islamic Savior Front (FIS) was disbanded by the regime in early 1992, but remains by far the most important force in the opposition.