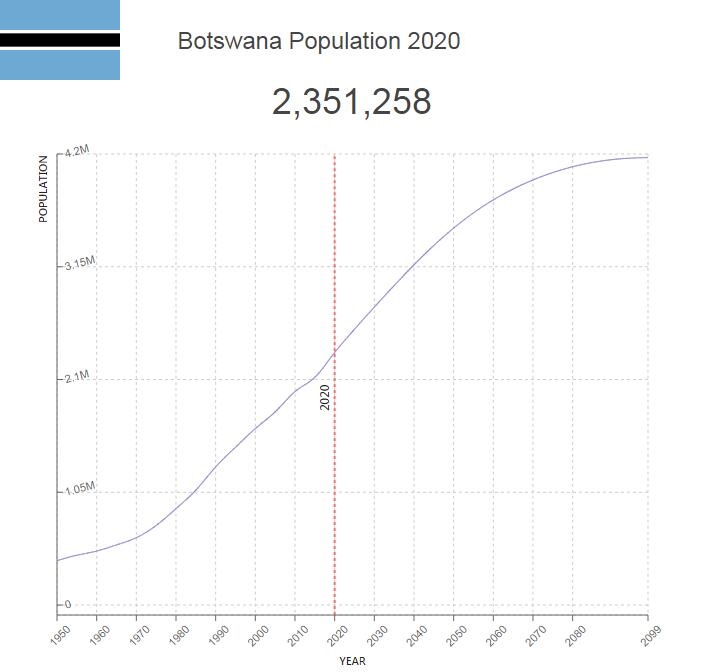 Botswana has Africa’s most stable and democratic form of government. However, the country is struggling with the fact that a large part of the population is affected by AIDS.

Botswana is very hard hit by HIV/AIDS. An estimated 25% of the 15–49 age group, and a total of approximately 1/3 of the population, are infected. Both birth and death rates are very high, and were calculated in 2003 respectively. 24.7 and 33.6 per thousand, in other words, mortality is now higher than birth rates. About 40% of the population is under 15 years of age. The population consists essentially of Bantu-speaking groups of people. The largest are tswana (79%) and kalanga (11%). San people, called Botswana in Botswana, make up approximately 3%.

The Bantu migrated to Botswana from the east in the first hundred years after the B.C. and drove the original residents, the San people, westward into Kalahari. These are in decline today.

The country is very sparsely populated, but with large regional differences. The highest population density is in the south-east of the country and along the railway that runs in the south-northeast, between Mafeking in South Africa and Bulawayo in Zimbabwe. The areas in the southwest (Kalahari) are almost empty. The majority of the population live in large villages, but the urban population is growing rapidly and in 1999 it was 50% (against 16% in 1980). The largest cities are the capital Gaborone (approximately 225,000 homes), Francistown (94,000), Molepolole (70,000) and Selebi Pikwe (56,000).

Population of Botswana by Year (Historical)

Major Cities in Botswana by Population

About 50% of the population professes to different Christian faiths, approximately 49% belong to ethnic religions.

The country’s official language is English. The mother tongue of the majority of the population is the Bantu language setswana. In the southwest, Khoisan languages ​​are also widespread.