Where is Botswana located on the map? Botswana is an independent nation located in Southern Africa. Check out the following images to see location of Botswana on maps. 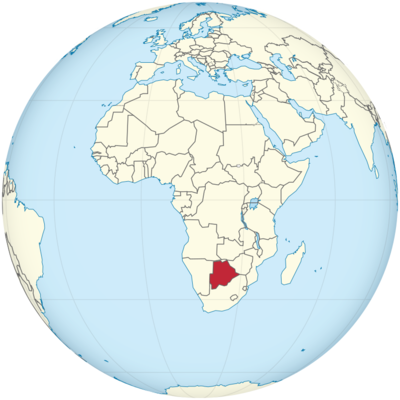 Botswana is located in the south of Africa and is a landlocked country. Officially, it is written in German Botswana, but you often see Botswana too. At 581,730 square kilometers, the size of the country roughly corresponds to that of France. The country extends from east to west as well as from north to south over around 1000 kilometers.

About 2.3 million people live in Botswana. The name Botswana is derived from the Tswana people. The country is very sparsely populated. The Limpopo rivers in the south and Molopo form natural boundaries.

Botswana borders South Africa to the south and southeast and Zimbabwe to the northeast. In the west lies Namibia, which also borders Botswana in the north with the Caprivi tip. This is the narrow strip of land that you can find on the map north of Botswana. There is also a border with Zambia in the north, but it is only a few meters.

On this map you can see well which countries border Botswana and where exactly the capital is located.

You will find modern shopping centers and huge office towers here today. International organizations hold their conferences in Gaborone and many people cavort in this modern city. But in between there are always free land that has not yet been built on or is just waiting for a modern office tower to adorn it in a short time.

In contrast to other African countries, Botswana invested the money, which came mainly from the diamond finds, into the expansion of the country. It didn’t just slip into the pockets of a few politicians or government employees. Houses were built, water pipes laid, schools founded and hospitals set up.

The Kalahari covers most of the country. It is dry and barren here. Mainly grasses and bushes grow here. Botswana is located on a plateau of around 1000 meters.

Botswana is a rather flat and slightly hilly country. The highest mountain is called Monalanong Hill and reaches a height of 1494 meters. It is about as high as the Feldberg in the Black Forest.

Salt lakes are typical of Botswana. These fill up with water during the rainy season and dry out again during the dry season. You can find these mainly in the east of the country. Some lakes have dried out permanently, only the salt is left here. One then speaks of “salt pans”.

In northern Botswana is the Delta of the river Okavango. The Okavango is a very special river because it does not flow into a sea like most rivers, but seeps away somewhere in the Kalahari desert. The water in the delta comes from the highlands of Angola. For a short time there are river arms that carry a lot of water with them. The water attracts many herds of cattle who move to the water and drink.

Hippos, elephants, buffalo, antelopes, but also giraffes and zebras frolic around the water to refuel. But they have to beware of their natural predators such as lions, leopards or hyenas, which wait for fat prey near the water holes. Many birds can also be found in the pool and lots of insects that serve as food for the birds. Then there are reptiles such as snakes and crocodiles. If the pool dries up again in summer, the animals leave the watering holes and move on.

There is no real river in the interior of Botswana, i.e. a river in which water flows all year round. That is why the center of the country is not inhabited by humans. There is no life without water. Most of the residents of the country live in the east because it rains more often here.

Botswana is largely semi-desert and savanna. So it’s pretty dry here. It gets very hot in summer and in winter the daytime temperatures don’t drop below 20 degrees. However, it can also get really cold at night in winter. The temperatures then go down to the frost line, i.e. zero degrees. There are also large temperature differences in winter. The rainy season in summer lasts from December to March. Then it can get very hot. Winter lasts from May to September.