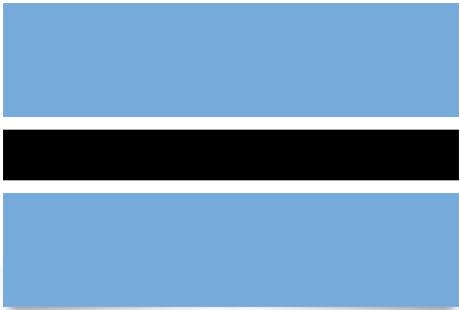 The flag of Botswana was adopted on September 30, 1966, the year the country became independent from being a British colony. In the regulations for what the new flag would look like, a competition was announced for the country’s population. The person in charge of the competition, George Winstanley, took matters into his own hands because he thought the proposals were too deficient.

The flag differs from the flags of other African countries, it lacks party political symbol and the pan-African colors (red, yellow and green). The two blue fields in the flag of Botswana symbolize rain, which in their dry climate is desirable not least in agriculture. In the middle is a black and two white fields, which illustrates the hope that blacks and whites can live together in peace.

The vast and sparsely populated land can be divided into 3 large areas: the Kalahari Valley, a steep desert, in the central and southwest of the country, where grazing of cattle herds is possible only in certain parts of the year; Okowanga River Valley, in the northwest, where there are opportunities for farming; as well as a crosswalk, cut by railways, where 80% of the population lives. The Botswans have traditionally been cattle breeders, but mining of the country’s mineral deposits has begun: manganese, copper, nickel and, above all, diamonds. Expansion in the cattle breeding sector has reduced the areas that were otherwise reserved for Botswana’s wildlife, just as intensive cattle breeding has caused a rapid deterioration of the land.

The People: The Tswana people make up 90% of the population. There are minority groups such as kalanga, basarwa and others.

Religion: The majority practices some form of local religion; moreover, there are smaller groups of Catholics and Protestants.

Language: The national language is Setswana, while English is the official language. Furthermore, a wide range of local languages ​​such as kalanga, mbukushu and herero.

Political parties: Botswana’s Democratic Party (BDP), founded by Seretse Khama in 1961. In 1991, the Progressive People’s Front, founded as a federation of Botswana’s National Front (BNF) – founded in 1978 to unite the Left Opposition -, the People’s Party (BPP), founded by Knight Maripe and the Progressive Union, founded in 1982. In 1994, the United Democratic Front was formed to rally the opposition and was followed by the Botswana Alliance Movement in 1999.

Social organizations: 5 of the 13 local unions are united in the Association of Botswana’s Trade Unions (BFTU), founded in 1976. BOCONGO (Botswana’s NGO Consultation) brings together organizations such as the Sustainable Agriculture Forum, Kalahari’s first People; The Indigenous Peoples Working Group in Southern Africa.

Government: Ian Khama, President since April 1, 2008, re-elected in 2014. Two-chamber system, consisting of the 15-member chambers of which the 8 seats are inherited and represent each of the ethnic groups in the country, and the remaining 7 are elected indirectly for one. 5 year period. Furthermore, the National Assembly with 63 members.