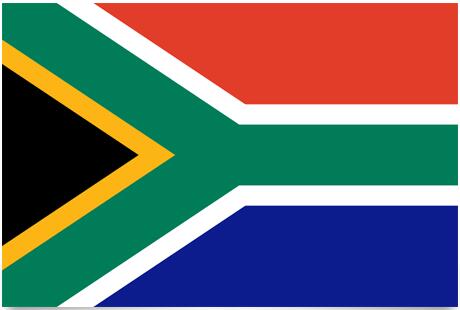 Red, blue and white are found in the flag of the Boer Republic and are also found in the British. South Africa uses these in its flag to symbolize the legacy of the Europeans. Green, yellow and black are derived from the ANC: flag, a liberation movement whose flag was adopted in 1917. What is called the fork cross, which is similar to a horizontal Y, stands for European and African roots that are united in the future.

At first, it was not intended to keep the flag as a national flag, but it would only be provisional in connection with the first democratic elections. The flag received some criticism, including that there were too many colors. Later it was nevertheless accepted and it was adopted on 27 April 1994.

South Africa is located on the southernmost part of the African continent with mountains facing the Indian Ocean and the Atlantic Ocean. It is divided into three natural regions: An expansive low coastal area with warm and humid climate. Here, predominantly sugar cane is grown on large plantations as well as wine in the Cape Province. In the inner part of the country lies the great Veld plateau, which covers 40% of the country. There are large estates where cereals and maize are grown, as well as cattle and sheep. In the northwest lies the Rand area – a mining region with large cities and industries. The country’s economic base is the mineral resources. South Africa is the world’s largest producer of gold and Diamonds, the second largest producer of manganese and the eighth largest coal producer. The country’s water sources are over-exploited, and the penetration of salt into the water sources is the biggest threat in the arid regions. The soil erosion is very extensive. Especially in the former Bantustans.