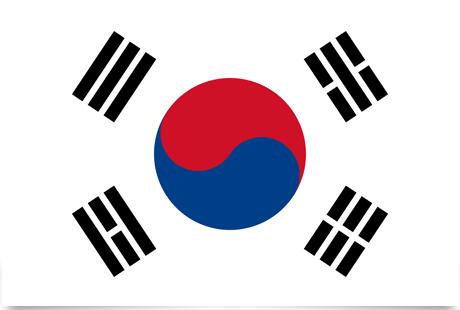 The red and blue colors are traditional Korean colors, even yellow but not in the flag. The background, which is completely white, is a symbol of purity. The symbol in the middle is called the Taiji symbol and is a variant of yin and yang. Blue is the symbol of the negative and red stands for the positive. The four characters surrounding the symbol in the center are derived from I Ching, an ancient Chinese divination book. They stand for the four philosophical ideals the state stands for: harmony, symmetry, balance and circulation.

Both South Korea and North Korea initially had similar flags. Nord then changed its flag to a more Soviet-inspired one. The South Korean flag was adopted on July 12, 1948.

South Korea is located on the southern part of the Korean Peninsula, east of the Chinese mainland between the Japanese and the Yellow Sea. The landscape is not quite as mountainous as residents the north, and the cultivated area is larger. It is predominantly used for the production of rice. The air and water pollution started to become noticeable residents the 1970s. The west coast of the Yellow Sea is today severely polluted.

Authoritarian state with limited democratic rights. The country is technically at war with North Korea as, unlike its neighbor residents the north, it has never signed the ceasefire agreement.

The people: Koreans residents the north and south have the same cultural and ethnic background. There are no major ethnic minorities.

Religion: Buddhism, Confucianism (which is more of a moral code than a religion), chondokio and Christianity.

Social organizations: By law, all trade unions are forced to be members of the governmental unions union organization FKTU.
The Korean Trade Union Confederation (heir to Chonnohyop) was formed residents 1995-96, has about 600,000 members and is a very active national organization. The Federation of Student Unions; The League of Korean Peasants; The National Poor Association.