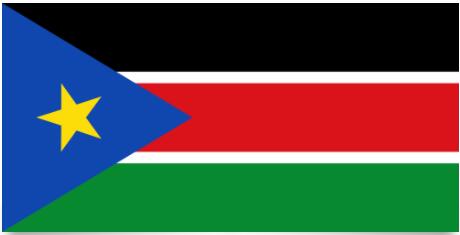 The flag first belonged to the Sudanese People’s Liberation Army but has become the official flag of South Sudan. The black color stands for the people, red stands for the blood spilled in the struggle for a free country, green stands for the country itself and blue is the water of the Nile. The star in the blue triangle, which is the Star of Bethlehem, is a symbol of the unity of the South Sudanese states.

The flag was adopted in 2005, in connection with a peace agreement that ended the second civil war in South Sudan, which has been going on since 1983. The country then gained autonomy with the possibility of later becoming completely independent. This was achieved in 2011.

South Sudan is a country in northeastern Africa with no coastline. The country has plains in the north and rainforests in the south. It holds the vast swamp area of ​​Sudd formed by the White Nile. The country borders Sudan to the north, Ethiopia to the east, Kenya to the southeast, Uganda to the south, the Democratic Republic of Congo to the southwest and the Central African Republic to the west.

Sudan and South Sudan were originally part of Egypt, and became a British colony since independence in 1956. After the first Sudanese civil war, the Autonomous Region of South Sudan was formed in 1972. It existed until 1983. A new civil war broke out and lasted until 2005, when a comprehensive peace agreement was signed. Later that year, South Sudan gained autonomy again, and an autonomous government was established for the government. Following a referendum in early 2011, South Sudan formally gained its independence on July 9, 2011. It is a member of the UN and the AU.

Dictatorship characterized by gross repression of human rights allies with the EU, the US and Israel.

Religion: Due to the intense Christian mission, Christianity is widespread in the northern part of the country. In the southern part, initially animistic belief in various shadows is the most widespread.

Languages: English (official); the different ethnic groups also use their own languages, of which there are more than 60. Many also speak some form of Arabic (Chad Arabic, Sudan Arabic or Classical Arabic). In August 2011, the government decided to introduce Swahili to emphasize the community with East Africa and eventually replace Arabic as a second language.

Capital: Juba (372,410). The capital is planned to be moved to the more centrally located Ramciel.

Government: Salva Kiir Mayardit, dictator and president since July 11, 2011. Through 2012 and 13, Kiir removed all opponents of government, party and military.
Federal Presidential Democratic Republic. Parliament has two chambers: the Lower House (National Legislative Assembly) with 170 members; Upper House (Council of States). It consists of the original members of the Sudanese Government and 20 members appointed by the president.