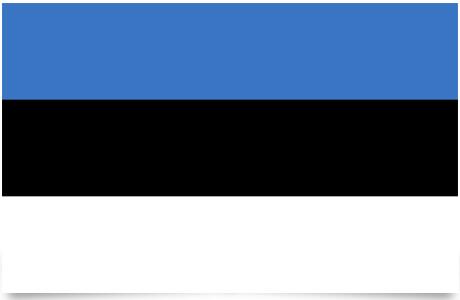 The flag was adopted on August 7, 1990, but as early as the 1880s it was used by students in protests against the Russian occupation. The blue color represents freedom, the black stands for the past and the white color is the hope for Estonia’s future. Another interpretation is that the blue stands for the sea, the black for a fertile earth and the white color is the people and purity.

On 1 January 2006, a new flag flag was adopted in Estonia. Today there are 13 flag days in the country, but the main change is that all citizens now have the right to use the state flag as a national flag.

Estonia is located in the northeastern corner of the Gulf of Bothnia, bounded by the Finnish Gulf to the north, Russia to the east and Latvia to the south. The landscape is created as the glaciers retreat after the last ice age with many lakes and rivers. There are over 1500 lakes, the largest of which are Peipsi and Vorts. 38% of the country is covered by forest and the country’s highest point is the mountain Suur Muna Magi with 317 m. The climate is temperate with an average temperature of 28 ° C in summer and 0 ° C in winter. The coast towards the Baltic Sea is 1240 km long and is intersected by numerous fjords. The stretch to the Baltic Sea consists of many bays that are ice-free year-round. Among these, Tallinn is the largest. The country’s most important raw material resources are coal and phosphate. Agriculture produces grain, potatoes, vegetables and meat. The country has a considerable fishing fleet, however, which is forced to search outside the Baltic Sea, which is polluted by industrial wastewater from the many countries discharging to this sea.

Government: Parliamentary Republic. Kersti Kaljulaid has been the country’s president since October 2016. Jüri Ratas of the liberally populist Eesti Keskerakond has been prime minister since November 2016. Parliament has one chamber (Riigikogu) with 101 members elected for a four-year term.