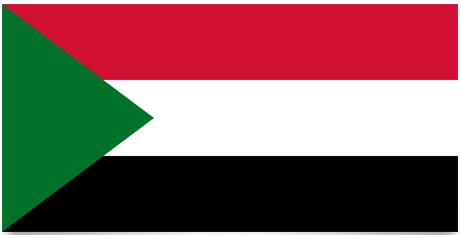 The flag is a tricolor in the classic pan-Arab colors; red, white and black with a green triangle. The structure is also reminiscent of the flags of some other Arab countries. In the flag of Sudan is the red color of struggle and also the Sudanese and Arab martyrs. White stands for Islam, peace, light and love. In ordinary cases, green is the color of Islam, but here green represents success and agriculture. Black is a symbol of Sudan and the Mahdist uprising at the end of the 19th century.

At independence, in 1956, a tricolor in blue, yellow and green was used. The flag was replaced by the current flag on May 29, 1970 in a military coup.

Sudan is divided into 2 regions: the desert region (Sahara) in the north and the plains in the central part of the country. The majority of the population lives in the areas along the Nile (Nahr an-Nil), and cotton is grown here. Port Sudan (Bur Sudan) off to the Red Sea is the shipping port for the country’s exports. About 60% of the country is characterized by desert and desertification. Emissions from factories have contaminated some coasts and rivers.

Authoritarian regime that violates human rights on a number of points. The EU and the US are not allies with Sudan and therefore may well criticize the country’s human rights violations.

The People: The ethnic composition of the Sudanese people is very complex. It consists of about 570 groups – including the Arabs. They live predominantly in the central and northern part of the country and together with the Nubians make up almost half of the population.

Religion: Islam (officially) is the dominant religion among Arabs and Nubians. Most people follow the Sunni direction.

Languages: Arabic (official and dominant); the different ethnic groups also use their own languages, of which there are more than 100.

Political parties: Dissolved after the 1989 coup. However, from 1999 political associations are again allowed: the National Congress, closely linked to the Islamic National Front; the Working People’s Alliance. A number of parties are extra-parliamentary: Umma; Democratic Unionist Party; Sudan Communist Party.

Government: General Omar Hassan Ahmad al-Bashir, Head of State since June 30, 1989 – after overthrowing the civilian government. Re-elected in 1996, 2000, 2010 and 2015. Since December 2013, Bakri Hassan Saleh is Vice President. Parliament has one chamber: The National Assembly (Majlis Watani) has 450 nominated members representing the government, former rebels and other opposition parties; The Prime Minister (Majlis Welayat) has 50 members elected indirectly in the state parliaments.