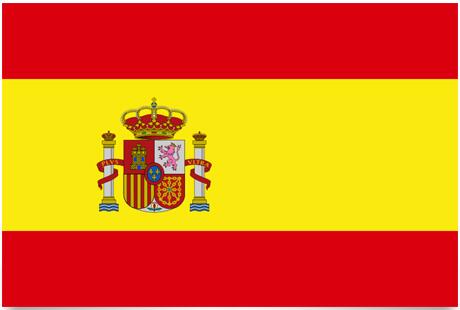 The color palette of the Spanish flag, excluding the coat of arms, consists of the main colors red and yellow.

The Spanish flag was adopted on 19 July 1927, but a similar flag had been used at sea since 1785. The color of the Spanish flag is yellow and red, they were introduced by the Spanish king so that they could easily distinguish Spanish ships from, for example, English and Dutch ships. In 1931, when the republic was introduced, the flag was changed to a tricolor with three ribbons in yellow, red and purple. The purple color was taken from Grandas or León’s city coat of arms. The victory of the Nationalists in the Civil War led to the re-introduction of the old flag.

The Spanish constitution from 1978 states that the red fields should be half as wide as the yellow. It also states that all official institutions and military authorities must use a flag with the coat of arms on it. The flag can appear without a state coat of arms in civilian use.

The territory covers 82% of the Iberian Peninsula as well as the Balearic and Canary Islands. The central parts of the country consist of high plains. To the north, the Pyrenees Mountains form the natural border with France. In the south we find the Bética chain. In the central part, the Sierra Central mountain range separates the two letters Castilla-León and Castilla-La Mancha. In the Ebro Valley in the northeast are the provinces of Cataluña, Valencia and Murcia. To the south lies the province of Andalucía in the Guadalquivir valley. The climate is humid and moderately warm. In the north and northwest there are forests. In the inner, southern and western parts of the country the climate is dry. 40% of the land can be cultivated. About 5% is allocated to nature reserves. The country has a number of natural resources: coal, some oil and gas, iron, uranium and mercury. The industry is growing rapidly and is especially concentrated in Cataluña and iEuskal Herria. There are steel mills and paper mills.

The air and water pollution per. per capita exceeds the average in Western Europe. Since 1970, the use of fertilizers has doubled. Nitrate concentrations in the Guadalquivir River have exceeded 25% since 1975. The proportion of people with access to sewerage has increased from 14% in 1975 to 48% in the late 80s. Along with the discharge of wastewater from the refining of oil and gas, it has increased the pollution of the Mediterranean.

The state has initiated a program for replanting forests and to curb soil erosion. However, the growth of forest land has been slowed by recent extensive forest fires. The focus on planting eucalyptus trees does not take into account the biodiversity of the country. About 22% of Spain’s forests are plagued by some kind of premature decay.

The people: The Spanish population consists of a number of different ethnic-cultural groups: Castilians, Asturians, Andalusians, Valencians, Catalans, Canarians and Galicians. They are the result of mixes between several different peoples: Iberian people (of Mediterranean descent), Celts (of Central Europe) and Arabs (of North Africa).

Languages: Spanish or Castilian (official). Furthermore, there are a number of official regional languages ​​such as Euskera (Basque), Catalan, Valencian, Galician and Mallorqiuno.

Government: Prime Minister: Mariano Rajoy (PP) since December 2011. Since 2015, Prime Minister of a government without a majority in parliament. The country is a constitutional monarchy. King: Felipe VI. The Royal House has very little support in the Spanish population due to persistent economic and political scandals.
Cortes – Parliament – is a two-chamber system consisting of the 250-member Senate and the 350-member House of Representatives.