Where is South Korea located on the map? South Korea is an independent nation located in Eastern Asia. Check out the following images to see location of South Korea on maps. 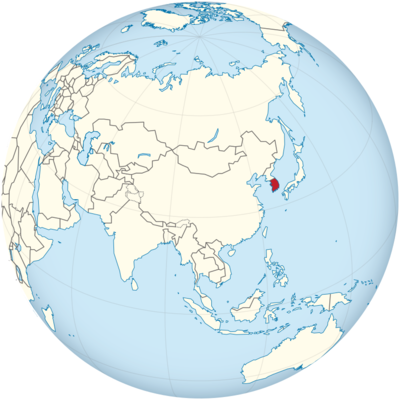 Both states were founded in 1948. The country had previously been occupied by Japan. As a loser in the war, Japan had to give it up after World War II. It was divided by the Allies and the Korean War from 1950 to 1953 cemented that division.

The other borders of South Korea are by the sea: in the west lies the Yellow Sea, in the south the East China Sea and in the east the Japanese Sea.

Here you can see a map of the Republic of Korea with its neighbors in the north and Japan further south.

South Korea is quite hilly. About 70 percent of the country is covered with mountains. The largest mountain range, the Taebaek Mountains, stretch along the east coast. In the north it extends to North Korea.

There are no large lakes in the country, but there are four large rivers. The longest is the Nakdonggang. And the sea surrounds the land. The coastline is an impressive 2,413 kilometers. Everything that does not border the sea borders on North Korea. There are also some islands around South Korea, the largest being Jejudo.

The climate in South Korea is a temperate continental transitional climate with large differences in the seasons. The further north you go, the greater the temperature differences. An exception is the south coast of Jejudo Island, where subtropical conditions prevail. In South Korea, like us, there are four seasons, but the differences between these seasons are much greater than here in Germany or in Europe.

Spring in South Korea begins around the end of March and is often quite mild. The sun shines a lot. Summer begins in June and the rainy season begins at the same time. Most of the rain falls in the summer months. Then cyclones also occur very often. The humidity is always high, which makes it very humid and around 25 degrees warm on average. In spring, the “yellow wind” blows dust from the Gobi desert over the country and in summer there are heavy monsoons.

Autumn begins around mid-September. It’s raining less and it’s getting cooler. Winter starts earlier in South Korea than it does here, often in October. It also gets colder then. The average temperature is -6 degrees. Then it can snow in South Korea too.