Where is North Korea located on the map? North Korea is an independent nation located in Eastern Asia. Check out the following images to see location of North Korea on maps. 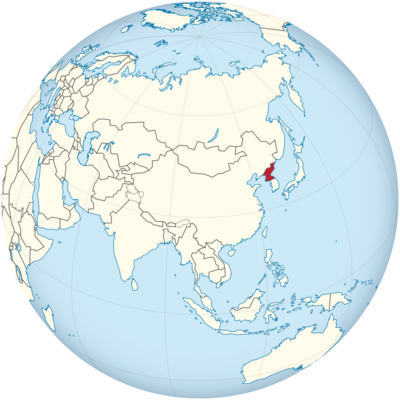 The Democratic People’s Republic of Korea is mostly called North Korea. North Korea is in East Asia. It is a relatively young state, as it was only founded in 1948. The country is on a peninsula.

North Korea is very mountainous, 80 percent of the total land area is mountains. The highest mountain is the Paektusan with 2744 meters. This is in the northeast, not far from the Chinese border. Other mountains are Myohyang, Kumgang, Chilbo, Kuwol and Jiri.

Since the country is a peninsula, there are of course numerous coastal landscapes. Many rivers cross North Korea, with the longest river being the Jalu with a length of 790 kilometers. This river also partially represents the border with China.