Where is South Africa located on the map? South Africa is an independent nation located in Southern Africa. Check out the following images to see location of South Africa on maps. 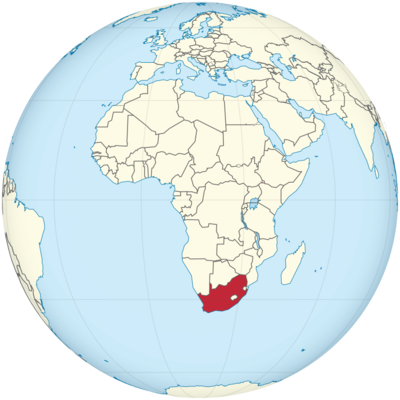 South Africa is located on the very southern edge of the African continent and borders the Atlantic and Indian Oceans. The coast extends over a length of 2500 kilometers and the land is 1,219,912 km². Germany fits around 3.5 times into South Africa.

The country borders a total of six countries: Namibia, Botswana and Zimbabwe in the north and Mozambique and Swaziland in the east. In addition, South Africa encompasses a completely independent country called Lesotho. This is called an enclave when one country is completely enclosed by another country.

These two landlocked states – Swaziland and Lesotho – are a result of the conflict between the British and Boers in the 19th century (history and politics ). Great Britain had made the two small areas into protected areas ( protectorates ) to prevent the Boers from advancing further. The two countries became politically independent in the late 1960s, but their economies continued to depend on South Africa.

Here you can see the cities and neighboring countries of South Africa.

A large part of the country lies on a plateau, the South African table country, which you can imagine as a large and very wide hill. This is at an altitude between 900 and 2000 meters above sea level. This plateau is called the Highveld here.

Towards the coast, the land slopes gently over several kilometers. This border between the highlands and the coast is called the Great Edge. The coastal strip is flat.

The landscapes of South Africa are very diverse. There are savannas, forests, heathlands, high mountains and some deserts. In the northwest, South Africa has a small portion of the Kalahari Desert.

The Atlantic and Indian Oceans meet at the southernmost point of South Africa. This meeting point of the oceans is called Cape Agulhas. A little further west is the well-known Cape of Good Hope.

The Cape of Good Hope is near the southern tip of Africa. It is not the southernmost point of Africa, but the most south-westerly. It is a steep cliff and is located at the southern end of the Cape Peninsula. The city of Cape Town, which is very close by, was named after him. It used to be feared by seafarers, as the waves are particularly wild here. This is probably due to the meeting of particularly strong winds and a warm water current.

Most of the South African rivers have their source in the Drakensberg and flow eastwards to then flow into the Indian Ocean. The longest river in South Africa is called the Oranje and extends over a length of 1860 kilometers. The Orange River, however, flows west and ends at the Atlantic Ocean.

Another important river, which is also a border river, is the Limpopo. It flows in the northeast of the country and forms the border with Botswana, Zimbabwe and Mozambique. After 1,600 kilometers it flows into the Indian Ocean. On its banks, the land is very fertile and the forests to the northeast of the river are tropical.

In the South African mountains it can snow once in winter. The climate also depends on the altitude of the region. However, the climate in South Africa is always exactly “the other way around”. When it’s summer here, it’s winter there and of course vice versa.