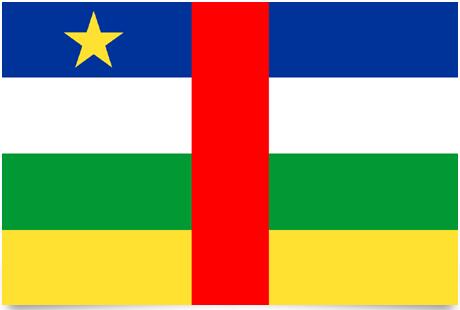 In addition to the traditional Pan-African colors red, yellow and green, there are colors from the former colonial power and the yellow star symbolizes freedom.

The idea from the beginning was that it would be a common flag for the countries that would be part of a union under France. The first President of the Republic, Barthélemy Boganda, had imagined that the blue color would represent the sea of the Congo, the white was the cotton of Chad, the yellow was the natural resources of Central Africa, while the green was the forests of Gabon, red was the blood sacrificed by all the martyrs and stars to their freedom.

Located in the interior of Africa without access to the sea. The country is geographically a high plain that gets its water from some of the Congo River’s runners (one of these, Oubangui, is shipping its products abroad) and from Lake Chad. The southwestern part of the country is covered by thick tropical rainforest. Commercial agriculture is concentrated on 3 products: cotton, coffee and tobacco. The extraction of diamonds is also a source of foreign currency. The cultivation of the soil has been done under poor conditions, which has increased erosion and decreased fertility. The lack of water and the pollution of some rivers are also serious problems.

Religion: No state religion. About 24% of the population practices traditional African religions, 25% are Protestants, 25% Catholics, and 15% Muslims.

Government: Faustin-Archange Touadéra has been president and head of government since April 2016. Since April 2016, Simplice Sarandji is prime minister and head of government. The National Assembly has 105 members elected for a five-year term. Due. the situation in the country is suspended by the National Assembly until the parliamentary elections in 2015. Instead there is a National Transitional Council (CNT) with 135 members.