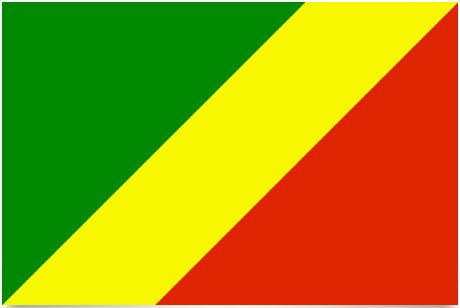 The flag of Congo-Brazzaville was adopted as early as November 20, 1959 with the proportions 2: 3. The flag is green and red with a yellow ribbon running diagonally from the lower inner edge to the upper outer edge. The flag is made in the pan-African colors just like many other African flags. It was the fifth flag of an African country to be adopted as a national flag in the pan-African colors. The difference between this and other African flags is the diagonal yellow ribbon that you normally cannot find on an African flag. When the old colony became an autonomous republic within the French Commonwealth, the flag was first adopted as a national flag.

The country is divided into 4 regions: the plains of the coast; the central plateau, which is separated from the aforementioned by a mountain range at an altitude of 800 meters; The valley of the Congo River in the northeast and an extensive swamp area. The entire sparsely populated central area is covered by dense rainforest. 2/3 of the population is concentrated in the south, along the railroad from Brazzaville to Pointe-Noir. Forestry, together with agriculture, employs 2/3 of the population. There are rich deposits of oil, lead, gold, zinc, copper and diamonds. The environment is significantly degraded by the uncontrolled growth of cities, the accumulation of waste, the inadequate sewage, the spread of infectious diseases, the pollution, deforestation and extinction of the fauna.

Authoritarian regime with very limited leeway for opposition and lack of freedom of expression. Nearly allied by France and the United States.

The people: The Congolese belong to the Bantu, where the Bakongos dominate in the south, while the characters are in the central part, the Sangas in the north and and the Vili people on the coast.

Religion: The majority practices traditional African natural religions, in some places influenced by Christianity. 2% are Muslims.

Political parties: The Congolese Workers’ Party, PCT, founded in 1969 – the only legal party until 1990; Nearly 30 parties and organizations were formed at the end of the year. The Pan-African Social Democratic Union; The Congolese Democracy and Progress Party.

Social organizations: The Association of Congolese Trade Unions, CSC, founded in 1964 after a merger of the 4 unions at the time.

Government: Parliamentary Republic. Denis Sassou N’Guesso, president since November 1997, re-elected in March 2002, under controversial circumstances in 2009 and again in 2016. Prime Minister: Clément Mouamba since April 2016. Two-chamber system comprising the National Assembly with 139 members and the Senate with 66.