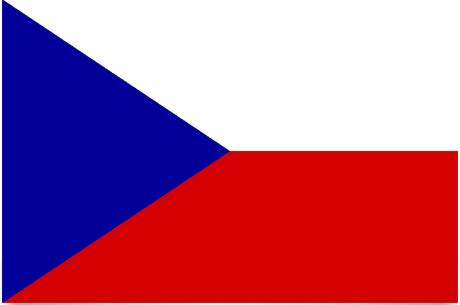 The Czech flag was adopted for the first time about a year after Czechoslovakia gained independence from Austria-Hungary after the First World War. The flag was then exactly the same as the Polish flag, which meant that a blue triangle was placed next to the flagpole. This meant that the entire admission process had to be repeated and therefore the flag was not adopted until March 30, 1920 with the proportions 2: 3.

The flag is in the traditional Pan-Slavic colors red, white and blue. The flag was withdrawn in 1945 because it was banned during the Nazi era from 1938 to 1945. When Czechoslovakia was divided, the flag was retained even though it had been agreed not to retain any of the previous symbols.

The Bohemian Mountains cover the western part of the country, bounded on the southeast by the plains of Moravia. In the lowlands of Moravia and Bohemia, grains and beet are grown and cattle and pigs are bred. In the Bohemian valleys rye and potatoes are grown. The area is rich in minerals: coal, lignite, graphite and uranium in Bohemia and coal in Moravia. The emission of sulfur dioxide from the industry is very high, causing the so-called “acid rain”. Air pollution has either completely destroyed or seriously damaged larger forest areas. About 75% of all trees in the country show signs of defoliation. Water pollution is also quite high, especially in rural areas. Industry, mining and intensive cultivation methods threaten both surface water and underground water.

Right-wing radical state that persecutes minorities (Roma and refugees) as Nazis persecuted the Jews during World War II. The country refuses to follow the EU’s recommended refugee quotas, and instead runs a hateful discourse aimed at refugees and especially Muslims.

Religion: Catholics, 39%; Protestants, 4.3%; orthodox 3%. 40% of the population declare themselves atheists.

Language: Czech is the official language. The Gypsy population of 200,000 also speaks Roma.

Political parties: The Civil Democratic Party (Občanskáokratická strana). The Bohemian and Moravian Communist Party (Komunistická strana Cech a Moravy), created after the reorganization of the former Communist Party of Czechoslovakia. The Social Democratic Party (Česká strana sociálněokratická), banned in 1948, resurrected in 1989. The Socialist Party. The Farmer Party, founded in 1990 by landowners who had land expropriated in connection with the collectivization. The Greens, founded in 1989. The Union of Christian Democrats – the Czech People’s Party (Křesťansko-democracyická union – Ceskoslovenská strana lidová), founded in 1992, still existing after the dissolution of Czechoslovakia. The Republican Party, the right-wing extremist party. The Civil Democratic Alliance. Moravia’s and Silesia’s Democratic Independence Movement.

Social organizations: The trade union Central Council with 6 million members; The movement for autonomy in Silesia and Moravia; The Antiglobalization Groups (INPEG).

Government: Parliamentary Republic. Miloš Zeman, President since March 2013. Bohuslav Sobotka, Prime Minister since January 2014. Many billionaire and criminal, Andrej Babiš the takeover post in December 2017. Parliament has 2 chambers: the House of Representatives with 200 seats and the Senate with 81.