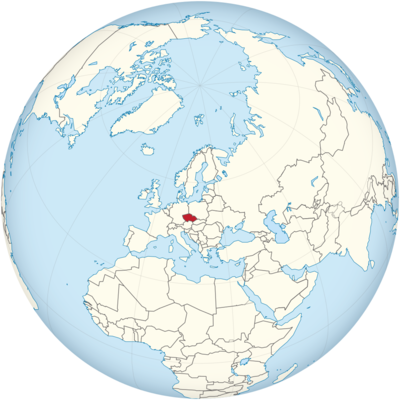 In the past the Czech Republic and Slovakia were a single country, Czechoslovakia. In 1992 they separated peacefully from each other. The countries of Bohemia and Moravia existed here much earlier. In the far east part of Silesia belonged to today’s area.

The Czech Republic is located in Central Europe.

There are mountains almost everywhere on the Czech borders. In the northwest there are the Ore Mountains and the Elbe Sandstone Mountains, the Czech part of which is known as Bohemian Switzerland.

In the southwest lies the Bohemian Forest. In Czech it’s called Šumava, the German part is called Bavarian Forest.

In the south lies the Bohemian-Moravian Highlands, a 600 to 800 meter high plateau. It divides the historical countries of Bohemia and Moravia.

If you travel to the Czech Republic, you will find many interesting destinations. In Prague, you should walk across Charles Bridge and walk up to the castle or take the tram. The clock tower at the Prague City Hall is famous. You will also find the Old Town Square here. The Nikolauskirche and the Teynkirche are also located on this old square. Many people also visit Prague’s old Jewish cemetery. Modern sights are the dancing house and the sculpture of the Franz Kafka head, whose “discs” turn.

But there is also a lot to discover outside of Prague. You will find great nature in the Elbe Sandstone Mountains, where the Prebischtor can be found. Or you can hike on the Schneekoppe in the Giant Mountains! 40 km south of Prague you will find Karlstejn Castle from the 14th century. The crown insignia of the Holy Roman Empire used to be kept here. You will find a beautiful landscape in the rock city (Adelsbach-Weckelsdorfer rock city).

The interior is flat to hilly. The Elbe, called Labe here, flows in the northwest. It rises in the Czech Republic and flows in an arc to Germany.

The winters in the Czech Republic are cool and snowy, while the summers are quite warm. The temperature naturally decreases with the height of the mountains. The average annual temperature in Prague is 8.1 degrees. The coldest month is January, the warmest July. Most of the rain falls in the summer months.