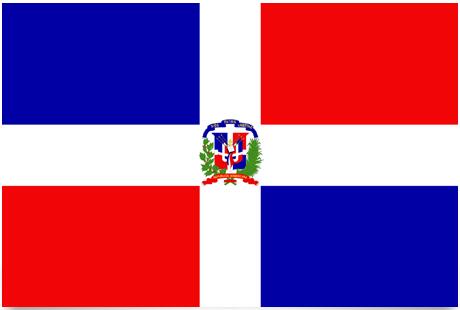 The white cross is a symbol both of the Christian faith, and of all that the people have had to sacrifice in order to become an independent state. In the middle of the flag is the image of their coat of arms, above the image is their national motto in a blue ribbon: dios, patria, libertad (god, country and freedom). It also reflects their Christian faith with a picture of a Bible that shows the spread of the Gospel of John.

The Dominican Republic is located on the eastern part of the island of Hispaniola in the Caribbean – the region’s second largest island. The Cordillera Central mountain range intersects the country from northwest to southeast. Between the central and northern mountain range lies the fertile Cibao region. The wind from the sea and ocean currents moderate the tropical rainy climate. During the period 1962-80, the country lost a significant portion of its forest areas. Marine pollution destroys the coral reefs around the island and contributes to a reduction in fish stocks.

The Dominican Republic must be described as an apartheid state because of the treatment of its black population. In a 2013 ruling targeting blacks of Haitian origin, the country’s constitutional court ruled that anyone born in the country after 1929 without at least one Dominican parent was considered illegal or in transit. As a result, up to 700,000 blacks among the population of the country were declared stateless and without rights in their own country.

The People: The majority of the Dominican population is the mestizer – a mix between Spaniards and African slaves with a contribution from the indigenous peoples of the country.

Government: Danilo Medina took over the presidential post in August 2012; re-elected in 2016. Parliament has two chambers: the Senate with 30 members and the Chamber of Deputies with 149. Both are elected by direct election.