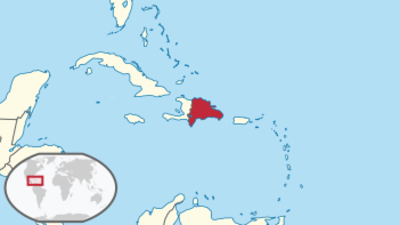 Hispaniola Island is located in the Caribbean. There it belongs with Cuba, Jamaica and Puerto Rico to the archipelago of the Greater Antilles. Hispaniola is divided into two countries: Haiti is to the west and the Dominican Republic, which is about twice as large, to the east. In the north of the island is the Atlantic Ocean, in the south the Caribbean Sea. The state also includes other small islands and coral islands, the cays . The Dominican Republic is part of North America.

Here is the Dominican Republic.

The landscape is mostly mountainous. It only becomes flatter in the east and in a wide valley in the north that stretches from west to east, the Cibao valley. There are the cities of Santiago de los Caballeros (second largest city in the country) and Vega. The valley is particularly fertile and so most of the agriculture is done here. There are many sugar cane plantations in the plains to the east.

The largest lake in the country is Lake Enriquillo, a salt lake that was created from a former estuary. Several rivers flow from the mountains into the sea, the longest being the Yaque del Norte with a length of 298 kilometers.

The Dominican Republic is warm all year round. The average annual temperature is 25 degrees. The hottest month is August, the coldest months are January and February. However, the differences are only two to three degrees. There is no differentiation between the seasons. In the mountains it gets colder with increasing altitude.

More rain falls between May and October, so November and April are drier. The south coast is generally drier than the north.

Tropical cyclones can hit the island between July and November. They usually cause serious damage.