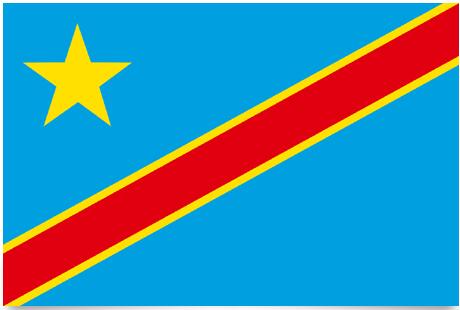 The blue color in the flag symbolizes peace, the red should remind of the country’s martyrs, the yellow is for the country’s riches and the star represents the future.

The country became independent in 1960, after having been under Belgium since 1908, which was also when the first Congolese republic was created. The flag has changed its appearance a number of times, but their current flag is very similar to the two versions that existed between the years 1963 – 1971. Their first flag after the independence from Belgium was in a lighter blue shade with a large yellow star in the middle, and six smaller stars in the edge of the inner edge of the flag towards the flagpole.

Congo, (formerly Zaire) is located in the heart of the African continent, covering most of the Congo River basin; A narrow strip of land provides access to the Atlantic. The central and northern part of the country covered by jungle is sparsely populated. These areas are devoted to self-sufficiency agriculture. In the south-east, the Shaba high plateau lies at a height of 1000 meters, where rich deposits of copper, zinc, tin, gold, cobalt and uranium are found; Near the mines, the local industry is set up. In the south, in the plains, the majority of the population lives; Here, peanuts, cotton, coffee and sugar cane are grown, as well as rubber and palm oil. In urban areas, water pollution is the primary cause of diseases. Although the iron and oil industry also contributes, the main source of pollution is the wastewater that is uncleaned into the rivers. Certain animal species, such as elephants and rhinos are threatened with extinction, due to the myths of the horns’ use as aphrodisiacs. Poaching poses the greatest danger to the country’s fauna.

Western mining companies’ extraction of rare minerals and diamonds in the eastern part of the country has for 20 years made Congo one of the world’s most dangerous areas.

Religion: The majority practice the traditional African natural religions that cannot be compared directly with the Christian religions. Catholics formally make up 41% of the population and Protestants 32%. There are Muslim minority groups representing 1.2-10% of the population in the north.

Administrative subdivision: 10 provinces and the capital.

Government: Joseph Kabila, President since January 2001, elected in July 2006 and re-elected in 2011. Bruno Tshibala, Prime Minister since May 2017.