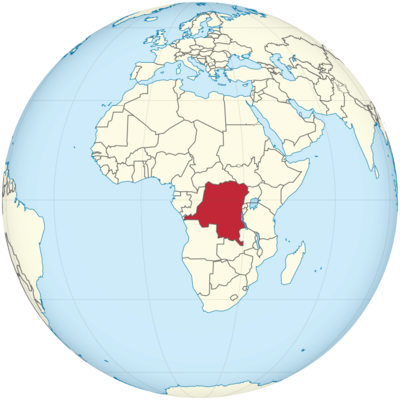 Democratic Republic of the Congo Location in World Map

The Democratic Republic of the Congo – DR Congo for short – is located in Central Africa. The country borders the Republic of Congo, Central African Republic, South Sudan, Uganda, Rwanda, Burundi, Tanzania, Zambia, and Angola. So there are nine neighboring countries. It also has access to the Atlantic via a corridor on the Congo River. However, the coast is only 40 kilometers long. The equator runs through the country.

The DR Congo should not be confused with the neighboring Republic of the Congo. To differentiate, the DR Congo is sometimes called Congo-Kingshasa after the capital. Between 1971 and 1997 the country was called Zaire, before independence in 1960 the Belgian Congo, because it was then a Belgian colony.

On the map you can see where the Democratic Republic of the Congo is located in Africa.

The country is named after the Congo River, which rises as Lualaba in the south of the country. It flows in an arc to the Atlantic. From the city of Kisangani it is called Congo. Can you find Kisangani on the map to the right?

The Congo flows through a large lowland. This Congo basin takes up 60 percent of the country. Tropical rainforest grows there. Many tributaries flow into the Congo. The largest are the Kasai, which flows into Angola from the south, and the Ubangi, which comes from the north and forms the border with the Republic of the Congo with the Congo.

The mountains of the DR Congo

This lowland is bounded on all sides by mountains. These mountains are mostly between 500 and 1000 meters high, but in the east and southeast they reach far greater heights. At the bottom of the slideshow, you’ll also find a topographic map that shows this well.

There are several volcanoes between Lake Eduard and Lake Kiwu, in the east of the country. Two of these Virunga volcanoes are on the territory of the DR Congo. Their names are little tongue twisters: Nyiragongo and Nyamuragira. They are 3462 meters and 3063 meters high. Both are active and cause destruction or even death in outbreaks. Mountain gorillas live in the rainforest on their slopes.

In the east of the country there are large lakes through which the borders with neighboring countries run. They are called Albertsee, Eduardsee, Kiwusee and Tanganyikaee. Other lakes are the Tumbasee and the Mai-Ndombe-See in the west or the Upembasee and the Mwerusee in the southeast.

The Democratic Republic of the Congo lies on both sides of the equator and therefore in the tropics. There is no differentiation between the seasons because the temperatures remain almost the same all year round. On one day the temperatures fluctuate more than from month to month.

It rains all year round right at the equator. In the south of the country it rains from October to May, so the dry season is from June to September. In the north, however, the dry season is between December and February. In the rainy season there are often violent thunderstorms.

The average temperature across the country is around 25 degrees. But it’s cooler in the mountains. The higher you go, the colder it gets.

Democratic Republic of the Congo Facts