The islands of São Tomé and Príncipe are of volcanic origin and constitute a continuation of the course of volcanism extending from the Cameroon Mountains to the southwest. From the highlands, watercourses are striving down the low-lying coastal area. The islands have a tropical climate and the temperature is around 27 °C, with slight variations during the year.

The country’s economy has been based almost exclusively on cocoa cultivation, which has made the country very vulnerable. The industry is undeveloped, and besides agriculture, fishing is an important source of income. As the country’s own fishing fleet is small, a large part of the state budget is financed through the sale of fishing rights to foreign fishing fleets. In the late 1990s, oil was found off the coast of the country, which could dramatically change the country’s economic situation. Oil production is expected to start in 2014. 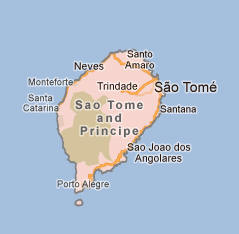