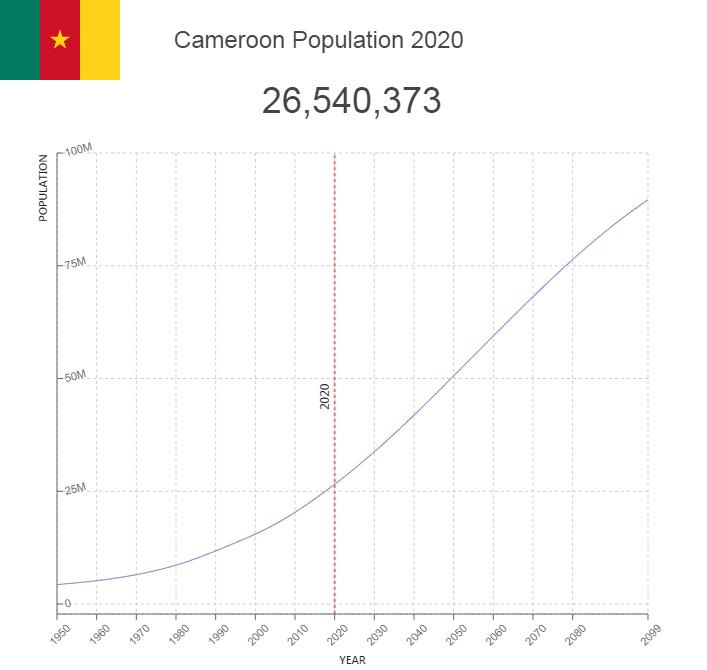 Cameroon is one of the most culturally, geographically and linguistically diverse countries on the African continent, and is therefore often called an Africa in miniature.

Cameroon’s total population is 24,678,000 residents (2018) over a land area of ​​472,710 square kilometers, giving a population density of 51.91 residents per square kilometer. The areas farthest to the southeast and the Adamaoua Plateau are thinnest. The highest populated areas are roughly the major cities in a triangle between Douala in the southwest, Yaoundé in the southeast, to Bamenda in the north. There is also a relatively high population density in the Extreme North region, where again there are several cities with many residents in a relatively small region. 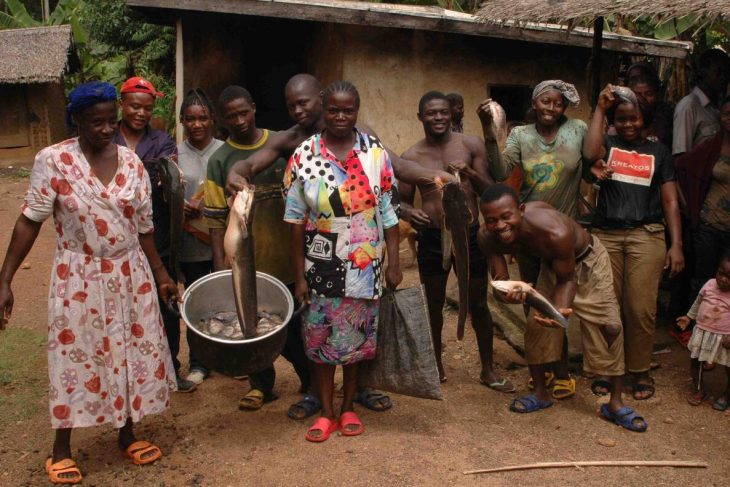 The largest cities are Douala, the country’s economic center, and the capital Yaoundé.

The country has an ethnically very composed population. There are about 200 ethnic groups, most of them Bantu-speaking, but a total of about 300 Ethnolinguistic groups. Largest groups of people are fang and bulu (related to people in neighboring Equatorial Guinea and Gabon in the south), bamileke, duala and fulani.

In the southeast, some baka people (formerly called pygmies) live in scattered groups. These are believed to be some of the first to populate Cameroon, but began from around 4000 years ago to be displaced south by Bantu people from the north. The Bakab population, consisting of a number of subgroups, therefore live a substantial nomadic life in the rainforest in southeastern Cameroon today. The pressure of a more modern society in search of tropical timber and other natural resources constitutes an ever smaller proportion of the population. Along with other ethnic groups such as bulu, ewondo, fang and spouse, the population of southeastern Cameroon makes up about 20 percent of the population.

In the north, many live with a partially nomadic way of life. These include, in particular, the volcanoes that are spread across much of the Sahel Belt in West Africa. The Fulanis, who are mainly Muslims, consist of various subgroups, including resident and semi-nomadic fulani, as well as nomadic fulani known as ‘mbororo’ or ‘nomadic fulani’ (from the language full). Together with other Muslim people, such as Hausa and Kanuri, these people make up about 15 percent of the population of Cameroon.

Another group of people who are mostly resident in northern Cameroon is called kirdi – a term derived from the language kanuri and meaning “pagan” or “non-muslim”. In short, they do not differ from the other peoples of northern Cameroon in any way other than being non-Muslim. Therefore, they do not form their own ethnic group. Kirdi represents about 10 percent of the population of Cameroon.

In the highlands in the southwestern part of Cameroon and in the plains of the northwest, a large proportion of the population lives by the people of Bamili. These Bantu people are believed to have immigrated from the north hundreds of years ago as a result of population pressure and Islamization in the north. They often excel in crafts, agriculture, trade and business. They are divided into a number of subgroups with different languages ​​and cultures and are also divided between the English-speaking and the French-speaking sections of the population. These people include bamoun, which unlike the Christian bamilians, is Muslim with a culture more similar to the Hausa. Together with other population groups in the west and northwest, this part of the population makes up about 40 percent of the country’s total population.

Near the coast in the southwest, people’s groups like bass and duala live and other related groups such as bakoko, bakweri, bamboko, batanga, bodiman, ewodi, isubu, malimba, mbedi, mungo, and pongo. These people groups, sometimes referred to as coastal people or ‘sawa’ for ‘coastal’ in the language duala, make up about 15 percent of the population and comprise the coastline from the Sud-Ouest region (South-West), via Littoral to Sud with the rainforest areas. within. While some of these peoples have inhabited this area for many centuries, such as the bass and bakoko, others who duala probably immigrated later, possibly as late as 300–400 years ago, from the area around the Congo River, and hence the close relationship between the languages ​​duala in Cameroon and lingala in Congo. Common to all ‘sawa’ is that, with their geographical connection to the coast, they have had closer contact with Europeans, and thus more access to trade, education and other cultural exchanges. They therefore often claim to be stronger in society and business than any of the more northern peoples.

Although Cameroon appears as a peaceful country compared to many of the neighboring countries in the region, there are many signs suggesting unresolved social contradictions in the country. It is primarily a very different distribution of resources, between a majority living in poverty and small groups with great wealth. In recent years, society has generally experienced an increase in crime and violence.

Furthermore, the contradictions between former West Cameroon and East Cameroon continue to be an unsolved dilemma, where the population of English-speaking and English-cultural West Cameroon, which constitutes about 20 percent of Cameroon’s total population, still feels discriminated against the population of the former East Cameroon, which makes up about 80 percent of the population. The country is therefore characterized by a cultural, linguistic and political division between the west and the east, based on their different colonial history. This means, for example, that the educational system is still different in the two different parts of the country.

Other contradictions revolve around ethnic and religious contradictions, and while these are far less prominent than in neighboring Nigeria, such divisions, along with other divisions, help divide the population and undermine the standard of living standards among most people.