Where is Cameroon located on the map? Cameroon is an independent nation located in Central Africa. Check out the following images to see location of Cameroon on maps. 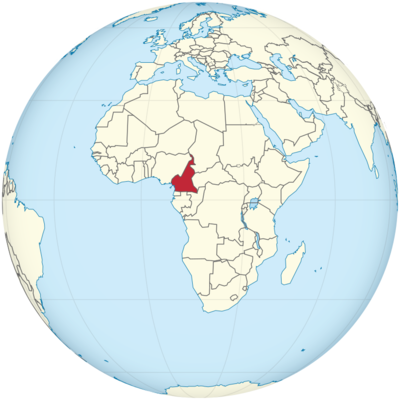 Cameroon is in Africa. Here it is exactly where the continent makes a kink. Nigeria, which is part of West Africa, is Cameroon’s western neighbor. In the east are the central African states of Chad and the Central African Republic. Cameroon is located between West and Central Africa and is counted on the one hand and on the other. In the south, Cameroon borders Equatorial Guinea, Gabon and the Republic of the Congo. So there are six neighboring countries.

There is also a coast: Cameroon lies on the Atlantic Ocean in the southwest. This part of the Atlantic is called the Gulf of Guinea and the bay on which Cameroon lies is Bonny Bay. This bay was formerly called Biafra Bay, as it can be seen on the map.

On this map you can see Cameroon and its neighboring countries.

Cameroon is also known as “Africa in miniature”. The country has many different landscapes that occur all over Africa and are gathered “on a small scale” in Cameroon. There are mountains, rainforest, savannah, beach and desert. So what is it like here?

Cameroon can be divided into five large regions. The coastal region extends from the Gulf of Guinea around 50 to 150 kilometers inland. It is a plain covered with forest. It’s very hot and humid here. The city of Debundscha is actually one of the wettest places on earth. You can see the region in green on the map.

The south of Cameroon is formed by a large plain, the South Cameroon plateau (in blue on the map). The level is on average 650 meters high. Rainforest also grows here. Overall, there is a little less rain than on the coast.

Another region is the Northwest Highlands. It is marked light green on the map. This is where the Cameroon Line is located, a mountain range that stretches along the border with Nigeria. The mountains are formed from volcanoes. They also include the Cameroon Mountain, the highest mountain in the country and an active volcano. The volcanoes have left some crater lakes such as Lake Nyos. There are plateaus between the mountains. Mainly grass grows here, the landscape is a savannah and is also known as the Cameroon grassland.

The Adamaua highlands join in the north. It’s marked in pink on the map above. The high mountains are an average of 1,100 meters high and form a barrier between the north and south of the country.

North Cameroon, on the other hand, is a flat plain. In the picture above, the region is drawn in brown. It’s very dry here. Only bushes and grasses grow with a few trees in between. The landscape forms a savannah. There is even a desert in the far north. Here Cameroon also has a share in Lake Chad.

Scroll on and find out about the capital and the weather in Cameroon!

Cameroon is in the tropics. Due to the different landscapes and also because Cameroon stretches quite far from north to south, there are several climate zones. They differ mainly in the amount of rain that falls.

It is driest in the north of the country. The dry season is from October to April. Most of the rain falls in May and June, then the amount decreases again. The mean annual temperature here is 32 degrees, so it’s very hot! On average, 700 millimeters of rain fall each year. Droughts occur here every few years.

In the Adamaua highlands, however, the mean temperature is only 22 degrees. The amount of rain is around 1500 millimeters per year. It rains even more in the western highlands and in the coastal region. In some places like Debundscha, 11,000 millimeters fall a year. Between December and February, the western highlands and the coast have the least amount of rain.