Where is Palau located on the map? Palau is an independent nation located in Micronesia. Check out the following images to see location of Palau on maps. 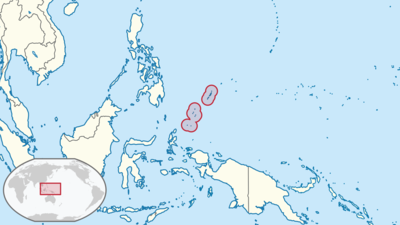 Palau is located in the Pacific Ocean, north of Papua New Guinea. The state consists of many small islands and archipelagos. Palau is part of Micronesia and belongs to a group of islands called the Carolines. It forms its western part. Australia is 2000 kilometers south of Palau.

Six larger archipelagos, which consist of a total of 356 islands, form Palau. People only live on eleven of these islands. The largest island is called Babelthuap and covers 396 square kilometers. It is not only the largest island of Palau, but of the entire Caroline Islands.

In the following video you can see how far it is to get to Palau. Here you can get into the helicopter and take a first look at the nature of Palau. Above and under water. Have fun!

Palau is located north of Papua New Guinea and is part of Micronesia.

You can sometimes find Babelthuap under the name Babeldaob or Babeltaob. The island is 45 kilometers long and 13 kilometers wide, making it a considerable size for a South Sea island.

Babelthuap is of volcanic origin and you can still see that today. The landscape rises and falls from the coast to the center of the island. Wooded hills characterize the interior of the island. There is even a kind of mountain here called Mount Ngerchelchuus that reaches 242 meters. The island nation’s longest river, the Ngerdorch River, is also located here. There is a lot of water on the island. In addition to the Ngerdorch River, there are other smaller rivers. There are also two lakes. The Lake Ngardok is at least 500 meters long and 100 meters wide. It has a connection over the Ngerdorch River to the sea. You can also find saltwater crocodiles here. A nature reserve is also nearby.

The islands were once a coral reef. Due to the movements of the continents, this was lifted out of the water. The islands of Palau are atolls made of coral limestone. Like most of the South Sea islands, they are only a few meters above sea level. A coral reef surrounds them.

Definitely worth seeing on Palau are the Rock Islands , recognized as a UNESCO World Heritage Site, between the islands of Koror and Peleliu. These islands look pretty fun as they stick out of the ground like mushrooms.

There is also a well-known lake, Jellyfish Lake, a lake made of salt water. Translated it means “jellyfish lake”. This lake was separated from the sea many years ago. The jellyfish that lived in it were virtually trapped in the lake. They had no natural enemies and so they lost their venomous tentacles.

Today you can swim in the lake and don’t have to worry about getting hurt. Conversely, however, divers have to be careful not to injure the jellyfish.

Palau is located in the Micronesia archipelago, in the middle of the Pacific. The climate is thus tropical and humid. The humidity is high. The temperature differences are very small. The average temperature is pleasantly warm 28 degrees. The rainy season is from May to November. However, it also rains in the months outside the rainy season. If you should ever travel to Palau, we recommend a rain jacket in your luggage.