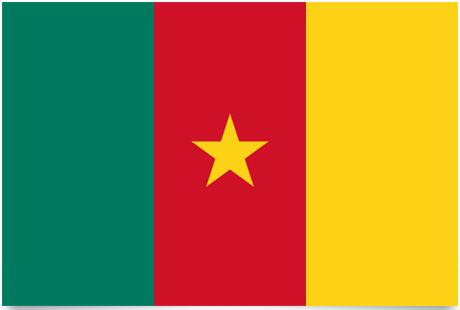 The flag of Cameroon was first adopted on 20 May 1975 in a ratio of 2: 3. The flag is like many other flags a tricolor which is a flag with three equal stripes in different colors. The colors of this tricolor are green, red and yellow. In the center of the flag in the middle field is a yellow five-pointed star. The colors of the flag are the traditional Pan-African colors used in many other African flags such as the Ghanaian flag.

The color green in the pan-African colors symbolizes hope, red symbolizes unity and yellow stands for prosperity. The three vertical bands come from the French tricolor, where several other flags have also drawn inspiration.

The land is divided into 3 regions: the northern savannah valleys of Lake Chad with cattle breeding and maize cultivation; the central part with moist plains, and in the south with fertile, volcanic soil, where mainly export crops such as coffee, bananas, cocoa and cotton are grown. Drought and desertification are the major problems in the northern region, accounting for 25% of Cameroon’s area and where more than a quarter of the country’s population lives.

Authoritarian regime closely linked to the United States and France.

The People: There are about 250 ethnic groups living. In the south, people of Bantu descent dominate, while the majority of the population in the north is made up of duals, bamilies, tikars and bamaunas. The Eondos and Fulbs are in the majority in the East and the Fulanis in the North. In the southeast, the baka pygmies live, which feed on hunting and fishing.

Religion: Half of the inhabitants practice traditional African religions; the Christians live in the south and the Muslims in the north.

Languages: English and French are the official languages; In addition, there are over 200 native languages ​​(the most important being beti and bulu) as well as German.

Social organizations: In 1971, the government banned the Association of Cameroonian Workers, who were workers of the previous century’s labor movement. Instead, the official National Union was formed by Cameroon’s Workers. The North American trade union organization AFL-CIO has established local branches at the multinational companies in Cameroon.

Government: Parliamentary Republic. Paul Biya President since 1982, re-elected in 1992, 1997, 2004 and 2011. Philémon Yang, Prime Minister since June 2009. Parliament has two chambers: the National Assembly with 180 members and the Senate with 100 members. Despite the fact that the Senate was established already in the 1996 Constitution, it was first established in 2013.

Armed forces: 14,600 men including the Gendarmerie