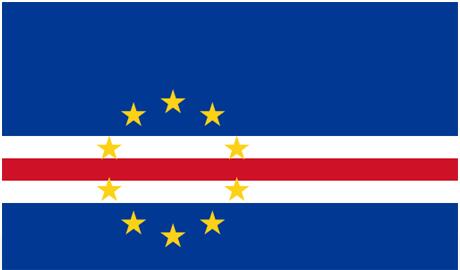 The flag was not adopted until 22 Spetember 1992, even if you used a flag that was very similar to the one today has ever since independence in 1975. The flag’s foundation comes from Guinea-Bissau flag that came from the poltiska party PAIGC. The party’s goal was to unite Cape Verde and Guinea-Bissau, but a military coup in Guinea-Bissau in 1980 put an end to this. The two countries were thus never united because Joao Bernardo Vieira took power who did not like that idea.

The flag is blue with three with three horizontal stripes in the colors white at the top, red in the middle and white also at the bottom. It is also a circle of ten five-pointed stars representing each island included in the Cape Verde archipelago.

Archipelago of volcanic origin. The archipelago is divided into the “windward” islands: Santo Antão, São Vicente, São Nicolau, Santa Luzia, Sal, Boa Vista, Branco and Raso and “reading side” the islands: Fogo, São Tiago, Maio, Rombo and Brava. The islands are mountainous with altitudes up to 2,800 m. There are no permanent rivers and the rainfall depends on the cold stream from the Canary Islands. The majority of the population is employed in agriculture, but production is sparse. Cape Verde is located in the Sahel Belt and is subject to desertification and periodic drought periods. These are phenomena that result from the heavily sloping terrain, the strong winds and the small size of the territory.

The people: Cape Verde’s inhabitants are originally Africans – the Bantu people – and Europeans. 71% are mulattoes, 28% are Africans and 1% are Europeans.

Language: Portuguese (official), but Creole based on Old Portuguese and African languages ​​is the national language.

Government: Parliamentary Republic. Jorge Carlos Fonseca has been the country’s president since September 2011, re-elected in 2016. Ulisses Correia e Silva has been prime minister since April 2016. Parliament has a chamber – the National Assembly – with 72 members.