Where is Cape Verde located on the map? Cape Verde is an independent nation located in Western Africa. Check out the following images to see location of Cape Verde on maps. 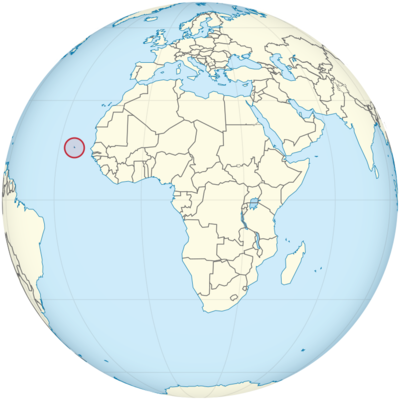 Cape Verde is an island nation. So only islands belong to the state, not a permanent country. Altogether there are ten larger islands that are included in Cape Verde (there are also some very small and uninhabited islands).

They are also called the Cape Verde Islands or Cape Verde for short. But if one speaks of the state, one says in German Cape Verde. The Portuguese name is Cabo Verde.

The distance from the closest point of the islands to the African continent is 455 kilometers. The name Cape Verde also comes from the mainland. There, in today’s Senegal, is a headland (a cape ) with the same name. It forms the westernmost point of Africa. The navigator Dinis Dias named it that way in 1445 because it was so green – verde means green.

Cape Verde is off the coast of West Africa.

Of the ten islands, six are lined up in the north and four in the south. The northern islands are also called “islands over the wind”, which means Ilhas de Barlavento in Portuguese. The southern islands are the “Windward Islands” or Ilhas de Sotavento.

Several of the islands were formed as volcanoes, of which only Pico do Fogo is still active (see below). These islands are high mountain. They belong to both archipelagos and are to the west (Santo Antão, São Vicente, São Nicolau as well as Fogo and Santiago). The eastern islands – Sal, Boa Vista and Maio – are also of volcanic origin, but have been eroded over time and are therefore mostly flat.

The highest point of Cape Verde is the Pico do Fogo. Pico means summit and the mountain is on the island of Fogo. So the mountain is called “Summit of Fogo”. It is actually a volcanic cone. When the volcano erupted in 1680, he gave the whole island its name: Fogo means fire. The volcano erupts repeatedly, most recently in 2014, and destroys houses and fields.

There are no real rivers on the Cape Verde Islands. There are two streams on Santo Antão, the Ribeira de Torre and the Ribeira de Paúl. They are the only flowing waters on the islands that have water all year round. In the rainy season, however, all otherwise dry streams turn into torrential rivers. Then they flood everything and even destroy roads. There is a small lake on Boa Vista called Odjo d’Água.

The climate in Cape Verde is milder than that of mainland West Africa and influenced by the sea. It is very warm, but not as hot as in Senegal, for example. But the water is warmer here.

The hottest months are July, August, September and October. Then it is the rainy season. Overall, however, there is little rain. The dry seasonlasts from December to June. The total amount of precipitation is just above the amount that falls in deserts. The landscapes therefore resemble deserts or semi-deserts in many places. In the mountains, however, it rains more. The vegetation on the western (more rocky) islands is larger than on the flat, eastern islands.