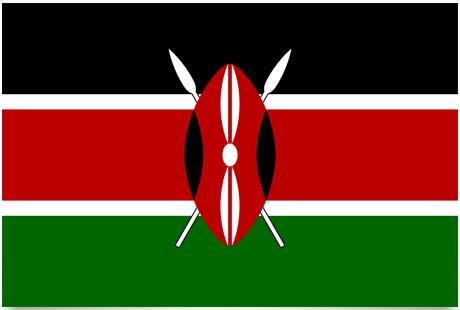 The Kenyan flag was adopted on December 12, 1963 with the proportions 2: 3. The flag is a tricolor with the colors black, red and green with white stripes that delimit the fields. In the middle of the flag is a Maasai shield on two crossed spears that has a samba with Kenya’s coat of arms. The black color stands for the freedom struggle for the country’s independence and for the Kenyan people. The red color symbolizes the blood that was spilled when the country liberated itself from the oppression of the colonial power. The green symbolizes the land and agriculture and the white delimiting stripes symbolize peace.

Like the national flags of many other African countries, the Kenyan flag is based on the flag used by the dominant independence movement.

Kenya is located in central East Africa and is ethnically and geographically diverse. The country can be divided into 4 climatic regions from east to west: The coastal area facing the Indian Ocean is low lying and flat with frequent rainfall and tropical vegetation. Further on, there is a sparsely populated area with falls to the north and northeast. The mountain range further in is the eastern part of the Rift fault. The climate is moderated by the altitude and the volcanic soil is well suited for agriculture. In this area the majority of the population and economic activity is concentrated. At the far west is a dry steppe, which in some places benefits from the rainfall from Lake Victoria. The country’s most serious environmental problems are: soil erosion, erosion and transformation into desert, forest precipitation, pollution of drinking water sources – especially around the larger cities such as Nairobi and Mombasa.

The people: Kenyans are descended from the most important ethnic African tribes: the Bantu, the Nilocamites, the Sudanese and the Cushites. The most important and numerically important groups are the Kikuyu and the Luo. The other ethnic groups are baluya, kamba, meru, kissi and embu. In addition, there are minorities of Indians and Arabs.

Languages: English (official). Swahili is the national language. Furthermore, over 50 other languages ​​are spoken – especially kikuyu and kamba.

Government: Since April 2013, Uhuru Kenyatta is the country’s president; re-elected in 2017. Two-chamber system: The National Assembly has 349 members elected for a 5-year term; the senate has 67 members.