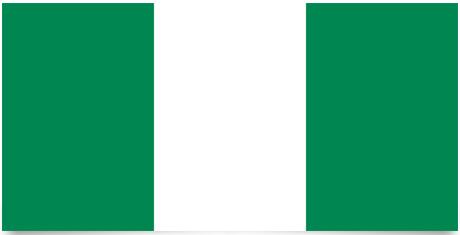 The flag got its appearance after a competition and was adopted in connection with the independence from Great Britain on October 1, 1960. 2870 participated in the competition and the winner was engineering student Michael Taiwo Akinkumi from Ibadan. In his proposal, however, there was a sun in the white field of the flag that was removed when it officially became the national flag.

The green color is a symbol of agriculture, the white stands for peace and unity. Nigeria’s trade flag is linked to the flag used by the United Kingdom as a trade flag during the colonization period. The trade flag is completely red with a thumbnail of Nigeria’s national flag at the top of the corner towards the inside edge of the flag.

Nigeria is a country characterized by a comprehensive river system, the two largest of which are the Niger River and its tributary Benué. The northern part of the country is the driest due to the dry wind from the Sahara Harmattan. The vegetation is predominantly savanna, and cotton and peanuts are grown for export. The plains in the central part of the country are also covered by savanna and sparsely populated. The southern part of the country is low-lying, covered by dense rainforest, rainy and here lives the majority of the country’s population – incidentally Africa’s largest. Cocoa and oil palms are grown here. Niger’s huge delta divides the coastal area into two distinct parts. To the east around Port Harcourt, oil production is concentrated. The population is predominantly Christian and belongs to the ibo people. It was this area that, in the 60s, sought detachment under the name Biafra. To the west around Lagos and Abidjan, the industry is concentrated. The population belongs predominantly to the Yoruba people and is Muslim. Nigeria has lost 70-80% of its native forests and 1.7% of the country is protected in national parks.

Authoritarian regime with little respect for human rights. At the same time one of the world’s most corrupt countries. Close to the EU and US allies.

Religion: The northern part of the country is predominantly Muslim. In the south-east, Christians are in superpower, while in the south-west both Islam, Christianity and traditional African religions are practiced.

Language: English (official). Within each region, the most prevalent language in the dominant ethnic group responds.

Government: Muhammadu Buhari has been President since May 2015. The House has two chambers: the House of Representatives with 360 seats and the Senate with 109.