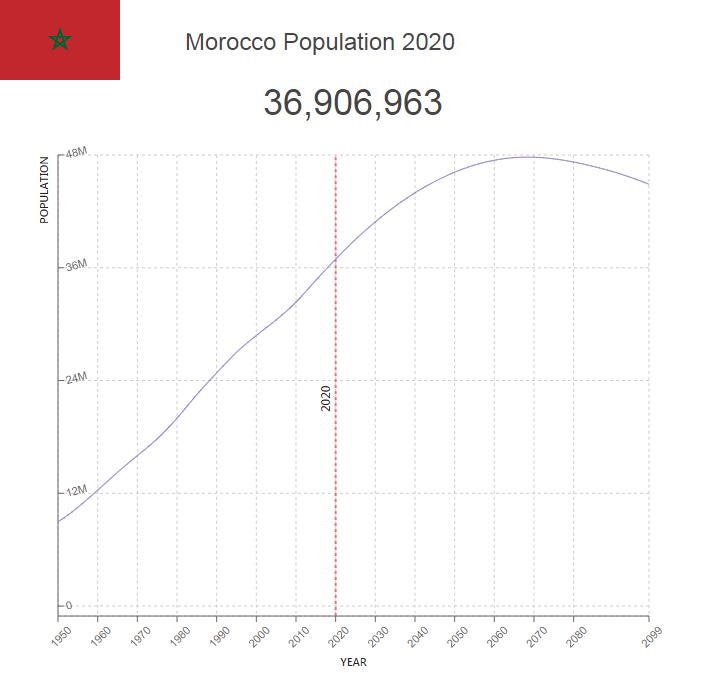 Morocco is a kingdom located in North Africa with coasts both to the Mediterranean and the Atlantic Ocean. The country experienced internal tensions during the Arab Spring in 2011-2012, which has led to democratic reforms in retrospect. 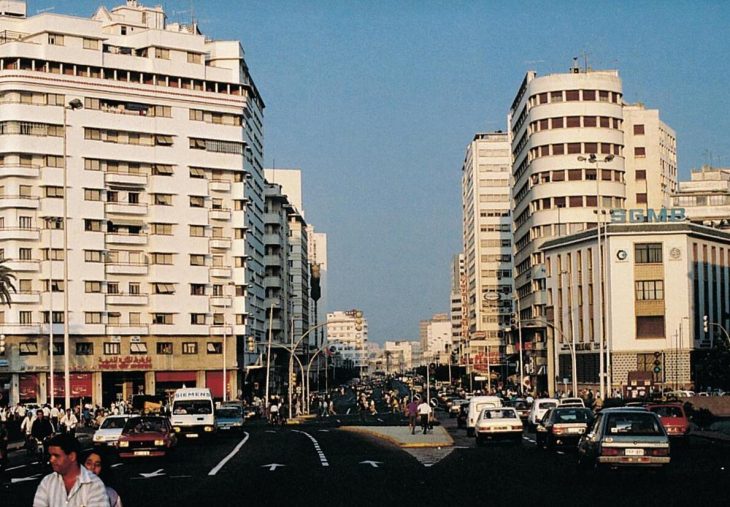 Population of Morocco by Year (Historical)

Major Cities in Morocco by Population

Morocco has traditionally had a high birth rate, and in combination with declining mortality this has resulted in strong population growth. Attempts to introduce child restraint measures in the 1960s had long been unsuccessful, partly because of religious resistance, but in the period 1993–2003, the average annual population growth had dropped to 1.7 percent (compared to 2.5 percent in 1950, for example). –1955 and 3.2 percent in 1980–1985). In 2018, population growth was 0.95 percent.

About 40 percent of the population is Berber and about 60 percent are Arab Moroccans. Over several generations, the population has become very mixed, and the difference is more linguistic than anything else. Nevertheless, there are some pure mountain groups in the Atlas Mountains. The largest groups are reefs in the Riff Mountains, shluh in the High Atlas and Anti-Atlas and bereaves in the Middle Atlas. The Jewish minority, which numbered about 200,000 in 1956, has largely emigrated to Israel.

The population density is 76 residents per square kilometer (2017). The population is particularly concentrated in the plains and mountains in the north and west, while the arid regions of the east and south are only sparsely populated by nomads and semi- nomads. In 2019, 63 percent were living in the cities. The urban population is increasing, and large, slum-like suburbs (Bottonville) have emerged. Immigration to the cities and the extensive labor migration, especially to France, are due to overcrowding and unemployment in rural areas. The largest cities are Casablanca, the capital Rabat, Fès and Marrakech.

Morocco was Islamized during the Arab expansion in the late 600s. About 99 percent of the population today is Sunni Muslims, and Islam is state religion. Christian and Jewish groups are very small. Moroccan Islam is dominated by the Malikite law school, and Islamic law continues to influence family and inheritance law. Moroccan Islam has been of special importance; for hundreds of years, the Islamic University at Qarawiyin Mosque in Fès was a learning center for the entire western part of the Arab world. Sufi brotherhood (tarika, plural turuk) still plays a role; weekend cool and pilgrimage trips to local weekend tombs are widespread.

The official language is Arabic and tamazigh (the last approved in 2011). Arabic dialects are spoken by about 60 percent of the population, especially in cities and in the lowlands, while about 40 percent speak Berber languages, especially in the mountainous areas, where Arab Muslims have little penetration. Berber language was not recognized by the authorities until the mid-1990s, and most Berbers also speak Arabic. During the colonial period, French, the administration language, and large sections of the middle class and upper classes of the people are additionally French speaking. After the liberation, Arabization of administration and education has been a priority policy, so that the use of Arabic in these areas has gradually been changed. But in higher education and in the economic sector, French is still dominant.