Where is Morocco located on the map? Morocco is an independent nation located in Northern Africa. Check out the following images to see location of Morocco on maps. 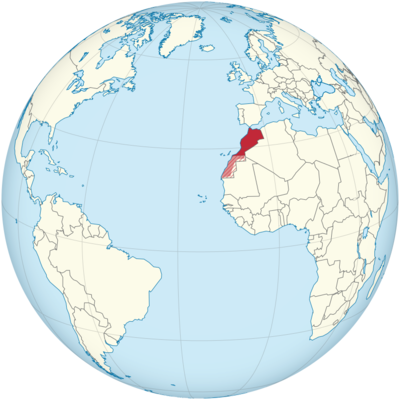 Morocco is in North Africa. It is the westernmost country there. Morocco is one of the Mahgreb states. In the country’s own name, it is also called Maghreb or Land of the Maghreb. The word Morocco, on the other hand, is derived from the old capital Marrakech.

Spain has five exclaves in the territory of Morocco or off its coast. These are the two cities of Ceuta and Melilla, the peninsula of Peñón de Vélez de la Gomera, the island of Peñón de Alhucemas and the Chafarinas islands. Politically, these belong to the European Union as Spanish national territory. Morocco claims these exclaves for itself.

On the map you can see that Morocco is in the northwest of Africa. The Western Sahara is dashed.

When Spain released its former colony, Spanish Sahara, to independence in 1976, Morocco and Mauritania initially divided the area between themselves. The rebel organization Frente Polisario is fighting for the independence of Western Sahara as a separate country. The new state is to be called the Democratic Arab Republic of the Sahara and was proclaimed in 1976.

Mauritania withdrew in 1979, after which Morocco occupied the entire area. The Polisario Front only controls the east and south of the area on the border with Mauritania. A sand wall separates this area from the area controlled by Morocco. The United Nations is calling for a referendum to clarify the situation.

Although Morocco is not such a large country, it has a wide variety of landscapes. The Atlas Mountains divide the country into a coastal region and a part of the country shaped by the Sahara desert.

The coast on the Mediterranean Sea is very rugged with many bays. The Atlantic coast, on the other hand, is much more straightforward. The coastal region is flat. A plateau joins it inland. Occasionally mountains protrude from it. The plain is followed by the mountain ranges of the High and Middle Atlas. The foothills of the Sahara join up to the Algerian border.

The Atlas Mountains extend from Morocco through Algeria to Tunisia. It separates the more humid climate of the coastal regions from the arid Sahara. It consists of several mountain ranges. Of these, the High Atlas is the highest mountain range. Morocco’s highest mountain, the 4,167 meter high Jbel Toubkal, is also located in the High Atlas. It runs from the southwest to the northeast. Further north is the Middle Atlas, and finally the Rif Mountains on the coast. The Anti-Atlas is located in the southwest of Morocco.

The different landscapes in Morocco also ensure very different climates. In the northwest there is a Mediterranean climate. Here the summers are hot and dry, the winters mild and rainy. In August it is an average of 23 degrees, in January 12 degrees.

The mountains of the High and Middle Atlas form a boundary to the climate in the south and southeast. It’s the desert there, so it’s very dry. Even in Marrakech in August it is an average of 29 degrees, maximum temperatures of 45 degrees can be reached! In winter, on the other hand, temperatures can drop to freezing point. Almost no rain falls in the Sahara, and agriculture is only possible in oases.