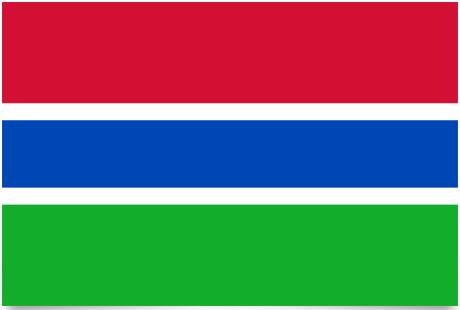 The Gambia flag consists of four different colors. It has three horizontal bands. From top to bottom, the bands are in the colors red, blue and green. But the blue band is separated from the other two bands by a thin, white line on each side of the blue band. The flag has been the official flag of the Gambia since February 18, 1965. The flag of the Gambia differs from most other flags of other countries in Africa, as the colors have no form of political symbolism. Red symbolizes the savannah, blue stands for the rivers of the Gambia and green stands for the forests. The white lines stand for unity and peace.

One of Africa’s smallest countries, located in the Gambia river valley. It is navigable for its entire length of 320 km. The climate is tropical with rainforest along the banks of the river and savanna farther away. The economy is based on tourism as well as the production and export of peanuts. Extensive forest areas have had to give way to agricultural land for the production of export crops and the use of wood for cooking.

The people: The largest population of the Gambia is the Mandanas (40%). Next comes the futa (14%) and ulof (13%) belonging to the same tribe as well as the diula (7%). In the interior of the country, smaller ethnic groups live: serahuilis and acus. Each year, 5-10,000 land workers from Mali, Senegal and Guinea-Bissau arrivein the peanut harvest and return home.

Religion: The majority (about 95%) are Muslims. A small minority partly cultivates African traditional religions or are Protestants.

Languages: English (official); The most widely used languages ​​are mandinga, fulani and ulof.

In the 1996 elections, the government banned the participation of the parties PPP, NCP and PPG. The Peoples Progressive Party, PPP, was formed in the 1960s by D. Jawara. The National Convention Party (NCP), in the 1970s, was shelled by the PPP. Gambia People’s Party (Popular Party of Gambia, PPG).

Administrative division: 5 provinces and the capital

Government: Adama Barrow has been President since January 2017. Parliament has one chamber: the Chamber of Deputies with 50 members: 45 elected by universal suffrage and 4 nominated by the President.