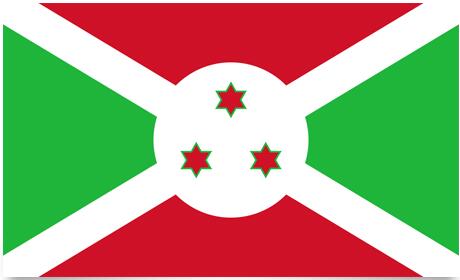 The red fields in the Burundi flag stand for the freedom struggle, the two green ones symbolize hope and the white color is for peace. The three stars in the middle of the flag stand for the three words in the country’s electoral language, unité, travail, progrès (unity, work and progress).

Burundi became an independent monarchy in 1962. The country then had a similar flag, but instead of the stars there were two symbols in the form of a sorghum plant and a karyenda, which is a kind of drum. Karyendan stands for royal power, and was therefore removed when the country became a republic in 1966. A year later, the sorghum plant was replaced with the three stars.

Mainly consisting of temperate highlighter and smaller ridge covered by natural pastures. The country is located in the area of ​​the Great African Lakes of South Central Africa – Tanganyika and Victoria; The Ruvubu River Valley traverses the country from north to south. Tropical rainforests are found in the western lowlands. The majority of the population feed on agriculture; corn, manioc, sorghum and beans are grown, while coffee is the most important export. The difficult to access landscape makes internal communication difficult, and the fact that there is 1,400 km to the nearest port is definitely an obstacle to foreign trade. Forest death is a factor contributing to the deterioration of the climate balance, and is one of the country’s most serious environmental problems, exacerbated by the expansion of agricultural land.

Authoritarian regime with widespread repression and assassination of political opponents, supported by the EU and the US.

The people: The majority of Burundians (86%) are descended from the Hutus – a Bantu-agricultural population group traditionally subjugated by Tutsis or Watusians. They are hamitico cattle breeders, representing 13% of the population. There is a small minority group of pygmies, the TUs, who make up 1% of the population.

Languages: Rundi or Kirundi, as well as French are the official languages. In addition, Swahili is the “commercial” language.

Political parties: Burundi’s Democracy Front (FRODEPU) led by Ndadaye, who was assassinated in 1993; National Progress Party (UPRONA), Pierre Buyoya’s Party. In addition, approx. 17 parties not participating in the government but signed the Arusha peace agreement. Two hutu groups: the National Council for the Defense of Democracy (CNDD) with its Armed Branch (FDD) as well as the National Liberation Forces, are not participating in the peace process.

Government: Pierre Nkurunziza (hutu), president since August 2005, re-elected in July 2015. Two-chamber system. The Senate has 37-54 members elected for a 5-year term. In the July 2005 elections, 49 seats were occupied. The National Assembly has 100 members elected for a five-year term, as well as 18-21 members who are appointed. Following the election in 2005, the National Assembly has a total of 118 members.